Gaon burhas will be given orientation training to make them more aware about their roles and responsibilities: Khandu 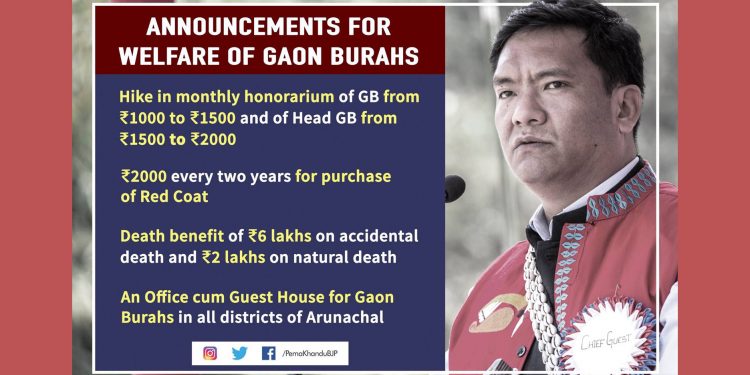 Arunachal Pradesh Chief Minister Pema Khandu on Friday made major announcements to strengthen the institution of gaon burhas (GBs) and for their welfare at a meeting of the All Arunachal Pradesh Gaon Burha Welfare Association here at Upper Dobam Village.

The chief minister announced for hike in monthly honorarium of GBs for which a notification has already been released on Thursday. He informed that for GBs the monthly honorarium has been increased from Rs 1000 to Rs 1500 and for Head GBs from Rs 1500 to Rs 2000.

Besides the hike in monthly honorarium, Khandu said it will be made mandatory to invite all GBs to every development meeting organized by the government offices. He said this will enable the GBs to be part of the decision making.

On death benefits, the chief minister announced that on accidental death, the immediate kith and kin of the deceased GB will receive Rs 6 lakh and on natural death Rs 2 lakh.

He said every GB will be insured under PM Jeevan Jyoti Bima Yojana to avail these benefits.

“The institutions of GBs cannot be compared with other institutions as it occupies respectable position in the society. The GBs have important role to play in bringing peace and harmony in the society. Through their wisdom and knowledge they are adapt at resolving conflicts at local level thus giving great assistance to the government in administering the area,” Khandu said.

He also said to empower the institutions of GBs; the decision to bring in two-tier panchayati raj system was effected in the state. He said with the two-tier system in place, GBs will have greater say in the matter of local development.

“GBs will be given orientation training to make them more aware about their roles and responsibilities,” he said.

Khandu further assured to fund for the construction of boundary wall and for development of Nyokum ground inside the office of GB premises here at Upper Dobam village.

He also promised to supply all necessary materials such as furniture, office materials for smooth functioning of the office.