Speaking on the occasion Mohilary called on the women fraternity to join hands and empower themselves.

Referring to the recent controversy over taking away the land rights of the Koch Rajbongshi, Nepali, Santal and Nepali tribes living in the Bodoland Territorial Area Districts (BTAD) region, he added that was a mistake.

Mohilary also said that the proposal shall be rectified and that it was presented in a wrong way. 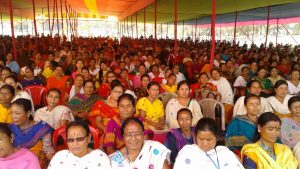 Mohilary also lambasted hate comments on the Bodo community which emerged in a section of media reports and social media sites.

The speakers emphasized the need of revolutionizing the concept of women empowerment for bringing in a positive change in the society in particular and the world at large.