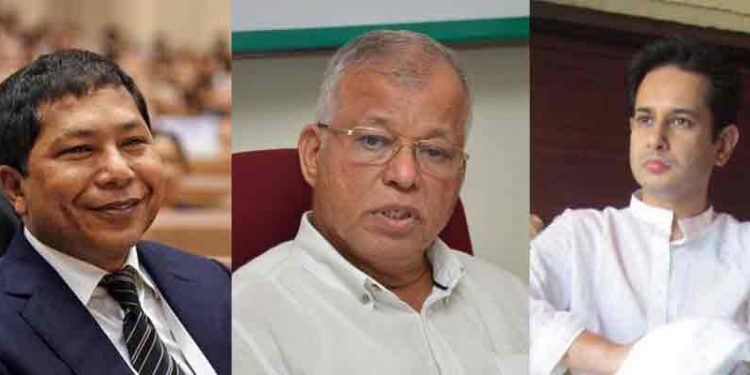 Pradyot Manikya Debbarma tendered his resignation on September 16 as the PCC president of Tripura.

His resignation letter addressed to the AICC general secretary Luizinho Faleiro was made public on Tuesday.

“Several of us are aware of your repeated attempts to dislodge many leaders from the northeast, including the former CM of Meghalaya Mukul Sangma from the post of CLP leader,” Debbarma said.

Debbarma said former PCC president of Manipur TN Haokip was not even informed about his removal when he was protesting at Jantar Mantar against the Citizenship Amendment Bill before the Lok Sabha Elections.

“The same happened when you (Faleiro) replaced Birajit Sinha and appointed me (as president of TPCC),” he said.

Debbarma said Birajit Sinha had received the news about his removal through a SMS late in the night when he was travelling with a delegation to meet Rahul Gandhi for the NECC meet at Guwahati.

The former Congress president lambasted Luizinho Faleiro for hobnobbing with BJP members, and seeking advice from them in running the Congress.

“It was deeply worrying that a National General Secretary of the Congress was openly interacting with members of the BJP and taking instructions from them on how to conduct day to day affairs,” he said.

Debbarma said many leaders in the AICC look at the northeast as a cash cow with no interest in building the party, rather just use it as a conduit for money making.

The AICC has also destroyed the Northeast region with one incompetent general secretary after another.

“If we in the northeast thought CP Joshi was the reason we lost state after state, you (Luizinho Faleiro) will be known as the person who destroyed the essence of the Congress in the northeast,” he said.

“The misuse of funds through your observer Kipa Kaha in Sikkim elections is a common knowledge,” he said, adding that it has been reported to the Congress President and the Treasurer as well.

Debbarma said the Sikkim PCC President Bharat Basnet is a good hard working Congressman and almost 60 percent of his allocated funds were never given to him for campaigning.

“Despite my repeated pleas, you overlooked the mismanagement of funds and this deep rooted corruption is one the main reasons why the grand old party is stagnating in the northeast,” he told Luizinho Faleiro on the letter.

Debbarma said he gave his life to the party, and he still hold Rahul Gandhi, Sonia Gandhi and Priyanka Gandhi in the highest regard.

The sole heir of the 800-year-old Manikya dynasty of Tripura alleged Luizinho Faleiro humiliated him in front of several senior leaders and asked me to either resign or withdraw his Supreme Court Petition on the NRC.

“We Tripuris are loyal people and which is also why I turned down the BJP offer of being a minister or a Rajya Sabha nomination,” he said.