Age of expansionism is over, this is era of development: PM Modi tells China from Ladakh 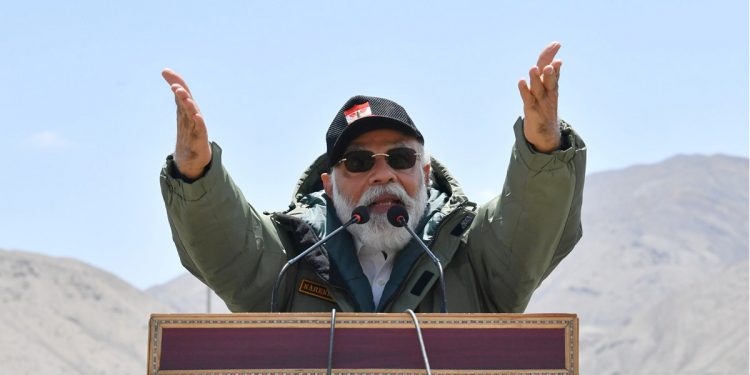 PM Narendra Modi addressing the Indian troops, during his visit to Nimu in Ladakh on Friday. Image credit: PIB

Taking an apparent dig at China, Prime Minister Narendra Modi on Friday said that the age of expansionism is over with the arrival of a new era of development.

“Age of expansionism is over, this is the age of development. History is witness that expansionist forces have either lost or were forced to turn back,” Modi said while addressing the soldiers in Ladakh’s Nimu.

He lauded the bravery shown by the Indian soldiers in the face-off with the Chinese army at Galwan Valley.

He affirmed that be it Leh-Ladakh, Kargil or the Siachen Glacier, be it the high mountains or the icy cold water that flows in the rivers, these are testimony to the gallantry of India’s Armed Forces.

Although Modi did not make a direct mention of China in his 26-minute speech, he said that the enemies of India have seen the fire and fury of its forces.

He stated that Indians can go about their lives peacefully because they know that the army is standing firm in protecting the nation.

He also said that that India has always given a befitting reply to anyone who has tried to disturb the prevailing atmosphere of peace and progress.

During the interaction, Prime Minister recalled the greatness of Ladakh’s culture as well as the noble teachings of Kushok Bakula Rimpoche.

He described Ladakh as a land of sacrifice and a land that has given several patriots.

Modi met the top leadership of the Indian Army and later interacted with personnel of the Army, Air Force and ITBP.