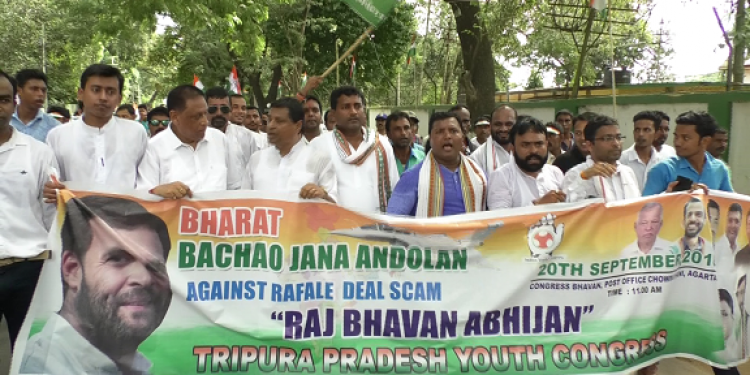 A view of the Youth Congress' protest rally carried out in Agartala on Thursday. Image - Northeast Now

The protest march against the BJP-led National Democratic Alliance (NDA) Government at the Centre over the Rafale fighter aircraft deal started from Pradesh Congress Bhavan and ended near the Circuit House area after they were stopped by police while heading towards Raj Bhavan.

Yadav alleged, “The BJP, which is in power at the Centre and in various States, is continuously taking anti-people steps and the Congress is awakening the people throughout India against this along with the police atrocities in all the BJP-ruled States.”

Moreover, the Youth Congress leader, as part of the pan India campaign by the All India Congress Committee (AICC) against the Modi Government over the Rafale issue to ‘apprise people’ the deal, also raising that Narendra Modi and Ambani organized the biggest scam in the Rafale deal and people should realize this.

While addressing a gathering, IYC leaders alleged the BJP-led National Democratic Alliance (NDA) Government has “misled” the nation and none of the promises made by PM Modi in the name of ‘Acche Din’ has never materialized.

The Congress has termed the ‘Rafale deal as the biggest scam’ and has been demanding formation of a Joint Parliamentary Committee (JPC) to probe the deal.

In view of the protest march, heavy security arrangement was made near the Circuit House area and police barricaded the area to stop IYC leaders and workers from marching towards the Raj Bhavan.