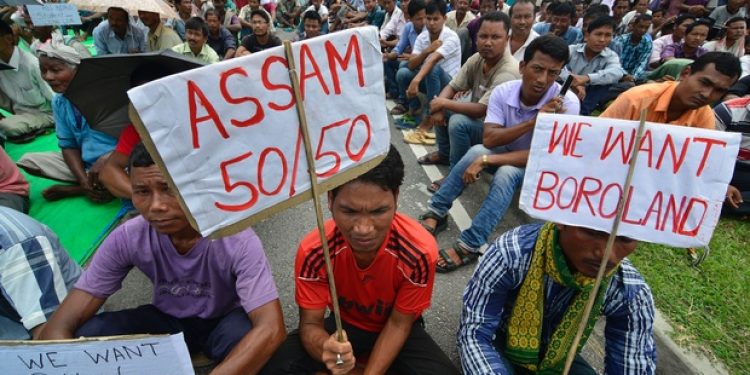 The influential All Bodo Students Union (ABSU) and the National Democratic Front of Bodoland-Progressive (NDFB-P) on Sunday have issued a strong threat to both the Central and the Assam Governments over their long-pending demand of a separate Bodoland.

The prominent students’ body of the Bodos and the pro-talk faction of the Bodo militant outfit have threatened that the BJP would loose the support of the Bodo community in the nesuing Lok Sabha elections scheduled for early next year if Bodoland is not created before that.

Both the ABSU and the NDFB-P have vowed to defeat the saffron party if it did not take concrete steps for a separate state for the Bodos before the 2019 polls.

Meanwhile, the Bodoland Peoples Front (BPF), an alliance partner in the BJP-led coalition in Assam has downplayed the threat so as the BJP, the main party in the State Government.

According to reports, the BPF reiterated their continued support to the BJP and underlined that a separate Bodoland was not an issue for the party.

Both the ABSU and the NDFB-P alleged that the BJP had made tall assurances before the last Lok Sabha as well as the Assembly elections for a separate Bodo state, but after assuming power, the saffron party simply refused to talk on the issue.

Notably, the demand for a separate Bodoland state began way back in 1967. It took the form of an armed conflict in the late 80s after the formation of the Bodo Security Force, a militant group later renamed as NDFB.