Attempt to do away with burning of straw in fields, enhance farmers’ income 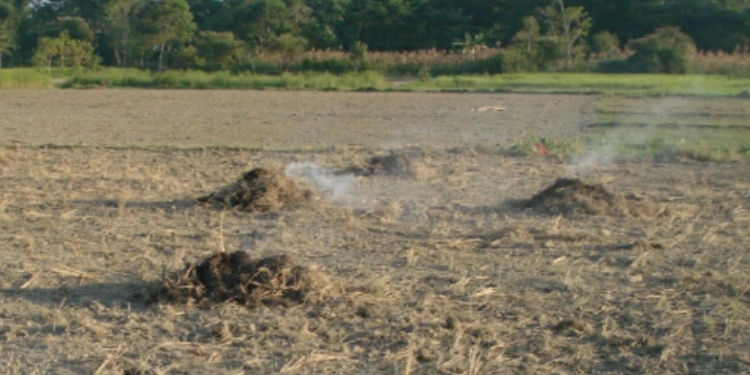 In a bid to keep Assam’s atmosphere from going the Delhi way as well as  increase the income of farmers, the Agricultural Engineering department of Assam Agricultural University (AAU)  has demonstrated the use of  a  tractor- operated straw chopper at the  riverine area of Neol Gaon here, recently.
Assistant professor Manas Jyoti Barooah of the department said that this was in consonance with the huge hullabaloo raised over the practice of  burning of stalks in the fields of Haryana and Punjab,  said to be one of the reasons for pollution in Delhi, and a subsequent  Parliamentary standing committee recommendation  that stalks should not be burnt in the fields.
Barooah said that the project of promoting the straw chopper was also to increase the income of farmers with the avowed objective of doubling it by 2022.
Neol Gaon lies 20 kms from the town and is inundated by flood water of the Brahmaputra annually.  The flood leaves behind a silt rich in organic material.  Although farmers undertake two crops, there is a delay in the cultivation of the second crop due to the standing paddy stalks in the fields which the farmers find very tedious to cut down, remove and burn .
Atul Missong, a farmer of Neol Gaon said that the straw chopper would make things much easier and that he would plant potatoes so that they become right for harvesting in January, the time when there is high demand for the tuber.
“The straw chopper has cut down the stalks into small pieces in no time and we can get down to sowing the potato. I’m happy that I can plant another crop so soon” he said.
” At times they chop the stalks haphazardly and dump them somewhere or burn them.  Cutting everything down with a machete is a painstaking job and they are averse to doing it,” Barooah said.
He further said that timely removal of the stalks would result in better agricultural practice,  especially in cultivating the second crop and thereby I crease the income of the farmer.