Out of 10 leaders arrested by Myanmar military in March, 5 were released on April 5 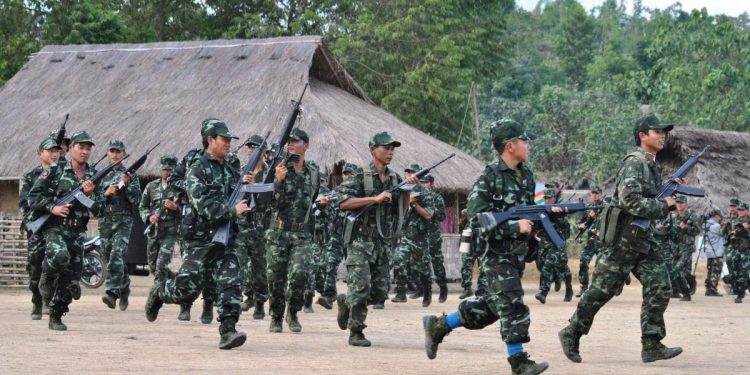 Five leaders of the Khaplang faction of the Nationalist Socialist Council of Nagaland (NSCN-K) will be tried in a Myanmarese court from May 6.

As per a News 18 report, Myanmar police produced the arrested NSCN-K leaders in a court and May 6 has been fixed as the next date of hearing.

The NSCN-K leaders landed in Myanmar army dragnet during an operation carried out on March 9, 2019 at the liaison office of the militant outfit in Myanmar’s Sagaing region.

On March 26, the Tatmadaw (Myanmar army) handed over the Naga separatist leaders to the police.

The arrested NSCN-K leaders have been identified as U An Kam, who is the leader of NSCN-K’s peace committee; U Kyaw Wan Sein, the spokesperson of the outfit and its officers Aung Mai, Aung Sai and U Saw Htein.

The report quoted a top-level commander of the militant outfit based in Myanmar as saying that the NSCN-K leadership has been making efforts to get the arrested leaders of the outfit released from the jail.

The leadership of the militant group has also requested the Myanmar government to release the leaders of the outfit as the peace process between the outfit and the government is going on, the report further quoted the commander as saying.

The outfit’s liaison officer Juvlengthong earlier said the Myanmar military had arrested 10 of its leaders in March.

The Myanmar military had taken over the headquarters of the outfit at Taga in Sagaing province on February 29, 2019 during a bloodless operation.

Although five of the leaders were released on April 5, but five other leaders are still under the custody of the Myanmar army.

The Tatmadaw (Myanmar army) has accused the NSCN-K leaders of helping the militant outfits from Northeast India in their struggle against India by giving shelter and allowing them to run schools of military training.

The Myanmar army also accused the NSCN-K of violating the existing bilateral ceasefire agreement which was signed on April 9, 2012 between the outfit and the Sagaing regional government.