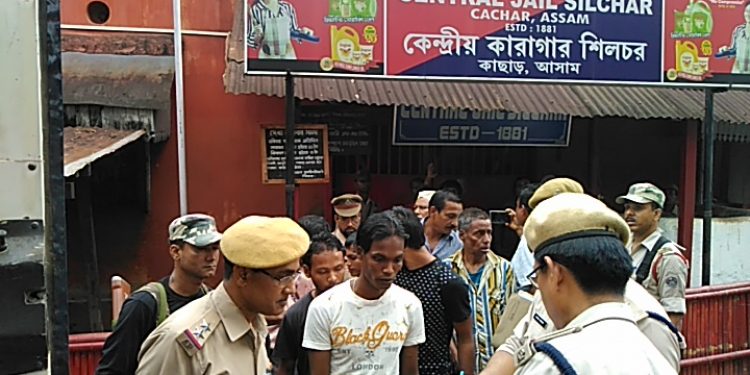 20 Bangladeshi nationals were sent back to Bangladesh from Sutarkandi border check point in Karimganj district.

The wait has been finally over for 20 odd Bangladeshi nationals, who were lodged in southern Assam’s Silchar Central Jail, as on Saturday morning they were deported to their country.

All of them were sent back to Bangladesh from Sutarkandi border check point in Karimganj district.

The hustle and bustle was witnessed outside Silchar jail since the early morning for routine check and getting all the paper works done. They were handed over to the Bangladeshi authorities, who confirmed that they were residents of the neighboring country.

Ikbal Hussain Talukdar, who was arrested by Hailakandi police for illegally entering into India and  had to serve five-year jail teem in Silchar, said, “I am happy to go back to my home after serving five years of prison here. I came to meet my relatives here but without any proper visa or passport. I have no complaints against anyone.”

Another Bangladeshi national, Sekhar Namasudra was arrested by Cachar police for a similar offence as he entered into India crossing the border from Jakiganj in Bangladesh. He served a jail term of three years.

Alorani Das, in her mid forties, served a prison term of two and half years for illegally entering into India. She was arrested by Karimganj police from Badarpur railway station.

Apart from Ikbal Hussain Taludar and Sekhar Namasudra, 18 others were arrested by Karimganj police from various parts of the district.

Rabindra Das, Digendra Chandra Das and Shah Ali Mia were residents of Kishoreganj while Md Ibrahim alias Ibrahim Talukdar and Faruk Mia were from Moulvi Bazaar and Sayed Al Amin were from Habiganj, Rabiul Sardar was from Gopalganj and Parimal Jaldas from Coxbazaar.

Alorani Das, the lone female Bangladeshi national deported was brought from Kokrajhar as she was lodged in jail there.