Police allegedly refused to register case at 3 police stations; Congress alleges that one BJP MLA pressurised not to accept the victim's FIR 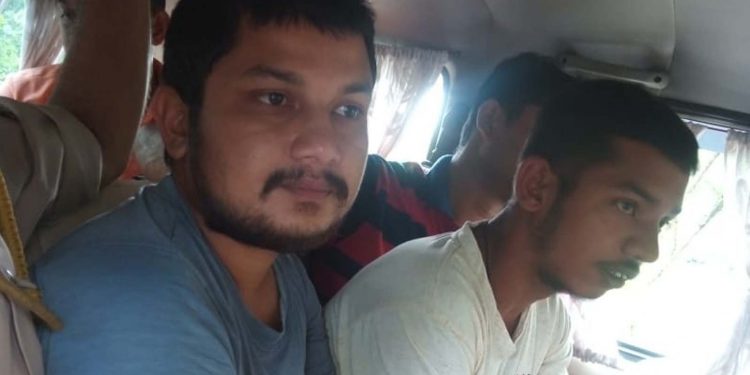 Two of the persons arrested by police for being involved in gangrape of a woman in Agartala. Image credit - Northeast Now

A housewife has been hospitalized after being gangraped by a group of 10 people on Tuesday night.

The victim informed the police that she was gangraped at Usha Bazar area in Agartala.

According to the gangrape victim, on Tuesday evening she was returning from the GBP Hospital to Battala in Agartala, the capital of Tripura.

She called an autorickshaw driver, who is well-known to her, to take her to the destination.

After sometime, the autorickshaw driver took her from the hospital.

And on the way, the auto driver took two more youths in the auto and after that the driver started to drive the auto towards the opposite direction.

Sensing danger, the lady tried to make hue and cry but the other youths who were sitting inside the auto forcibly stopped her from doing so.

The woman informed that as the auto reached Usha Bazar area, seven more people joined them and all of them raped her one by one.

The victim alleged that they were even talking to kill her but she begged to save her life.

She was then taken in the same auto and dumped at the Circuit House area.

The seriously injured woman somehow managed to contact at her home.

Arriving at the spot, the victim’s husband took her to the Tripura Medical College & Hospital.

She is currently undergoing treatment in the hospital.

The husband of the victim woman said last night, they went to three police stations but initially, no police station was ready to register the case.

Finally, a case was registered at the West Agartala Women Police Station.

On Wednesday evening, the police arrested two accused involved in the gangrape.

Police said they are searching for the other culprits.

As the incident spread as wildfire, political leaders and members of other organisations went to the hospital to see the victim.

CPI(M) leader Panchali Bhattacharjee after meeting the victim in the hospital told the media that such kind of incidents had never happened earlier in Agartala.

She has demanded arrest of all the culprits immediately.

Bhowmik told the media, “As per our information, one powerful BJP MLA was pressurising the police not to take FIR from the victim. So, the police did not want to register the case earlier.”

Human rights activist Purushottom Roy Barman and his team visited the gangrape victim in the hospital and condemned the incident.

He assured the victim woman of extending free legal support to her.