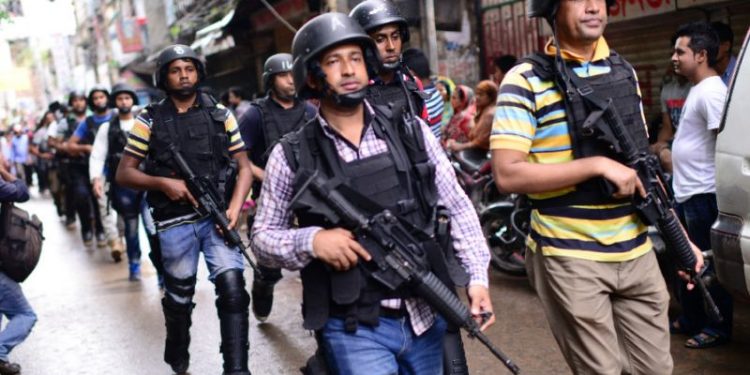 Two suspected Islamists terrorists blew themselves up during an operation launched by security forces on Sunday night at Mohammadpur area in Bangladesh.

“Acting on specific information, we went to check a house in the night. When we knocked at the house, someone from the next house started firing at us. The security forces retaliated and the firing continued for about an hour,” Efe News quoted Rapid Action Battalion commander Lieutenant Colonel Ashique Billah as saying.

He said around the morning prayer time, 45-60 minutes before the sunrise, the militants “threw few grenades and low-level cocktails (crude bomb) at the security forces

“There was a big explosion about 5 a.m. We were waiting for daylight when our commando team, bomb disposal unit and fire brigade to join us,” Billah said.

He said in drone surveillance, security forces found no living person in the house. “Our commandos raided the house and found two bodies blown in parts,

He said the bodies of the slain terrorists yet to be identified and have been sent for forensic tests.

“We suspect they were Islamists terrorists because they fired at us raising Allahu Akbar (Allah is greatest of all) slogan, but not sure to which group they belonged,” Billah said.

Bangladesh launched crackdown on Islamists following an attack on a Dhaka cafe in 2016 that killed 22 people. Though the attack was claimed by the Islamic States, the government blamed local Islamist group Jamaat-ul-Mujahideen Bangladesh (JMB) for the attack.

Around 70 people, including bloggers, intellectuals, foreigners and members of religious minorities in Bangladesh, were killed in a series of attacks between 2013 and 2016.