Trump to halt funding WHO over coronavirus outbreak 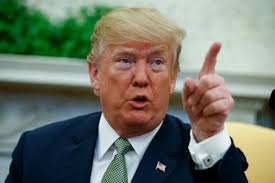 US President Donald Trump disclosed on Tuesday that he has instructed his administration to halt funding to the World Health Organization (WHO).

He said the WHO had ‘failed in its basic duty’ in its response to the coronavirus outbreak, according to reports.

He accused the UN body of mismanaging and covering up the spread of the virus after it emerged in China, and said it must be held accountable.

Also read: US President accuses WHO of being ‘China centric’

Trump has previously accused the WHO of being biased towards China.

The US president has himself come under criticism in his own country over his handling of the outbreak.

Also read: COVID-19: WHO calls for ‘unity’ amid US criticism

The US is the worst-affected country in the coronavirus pandemic with 592,743 cases and 25,239 deaths.

President Trump accused the WHO of having failed to adequately assess the outbreak when it first emerged in the city of Wuhan.