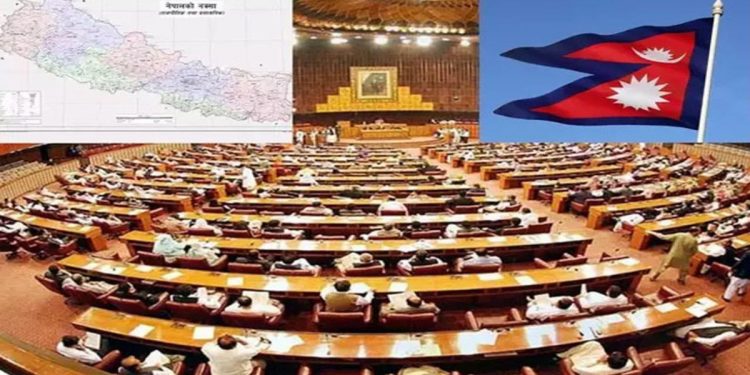 Nepal’s Parliament on Saturday passed an amendment to the Constitution of Nepal to redraw the country’s political map including the disputed areas in India – Kalapani, Lipulekh and Limpiyadhura.

No member of the Parliament voted against the controversial bill.

To pass the bill, a two-thirds majority of the Lower House with 275 members was required.

According to a media report, Opposition parties including Nepali Congress (NC), Rastriya Prajatantra Party (RPP) and the Rastriya Janata Party-Nepal (RJP-N) voted in favour of the bill to amend the Schedule 3 of the Constitution to draw the new controversial map.

Despite strong protest by New Delhi, Nepal’s Parliament voted for the new map claiming over the areas of Lipulekh, Kalapani, and Limpiyadhura along the international border with India.

Nepal maintains that India has claimed the three areas – Lipulekh, Kalapani and Limpiyadhura by building a road covering the areas.

The bill now will be sent to the National Assembly, say reports.

The National Assembly will give the lawmakers 72 hours to move the amendments against the provisions of the bill, if there is any.

The bill, if it is passed by the National Assembly, will be submitted to the President of the country for authentication, after which it will be incorporated in the Constitution.

The bill was introduced by the Nepal government in Parliament on May 31 with an aim to alter the country’s map.

A revised political and administrative map of the country was also released by the Nepal government with the new areas incorporated.

However, India vehemently opposed the move and warned Nepal not to resort to any “artificial enlargement” of the territory.