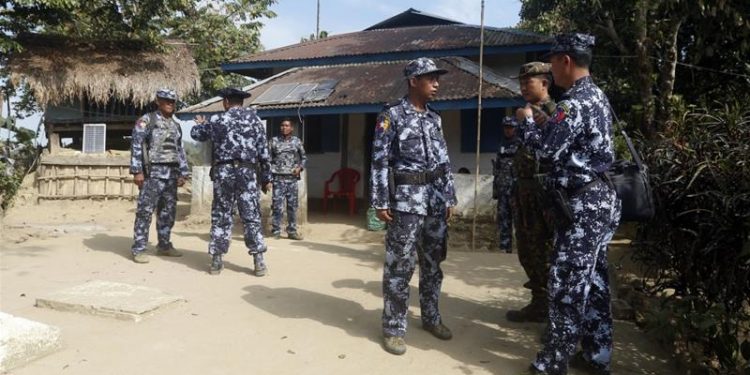 Eleven people have died in and around the Mrauk-U township in Myanmar’s Rakhine state after two days of bitter fighting between rebels of the Arakan Army (AA) and the Myanmar army Tatmadaw.

Sources in the Rakhine Ethnics Congress (REC) told Northeast Now that bodies of two Rakhines and one Rohingya were found late on Monday.

REC sources described them as “victims caught in the heavy crossfire between the AA rebels and government troops. They said these three dead bodies bring up the total death toll in two days of fighting to 11.

Eight dead bodies had been found on Sunday from  under a bridge near Shantaung village after a long gun-battle near Myaungbwe village on February  29 between the AA rebels and the government troops.

This is the most bitter round of fighting in recent months between the AA rebels and the Myanmar Army , which has formally requested Indian army to back up their efforts to corner the rebels.

The Tatmadaw requested permission to move through Indian territory in southern Mizoram to encircle some AA formations , but India has not allowed that. The request was formally conveyed during the recent visit of the Myanmar President to India.

It is learnt from sources in Mizoram that the Indian army has assured the Tatmadaw of initiating some blocking operations so that the AA rebels cannot fall back into Mizoram to evade the military dragnet and/or they cannpot also source the Mizoram villages for supplies and logistics.

“But we don’t want to get too involved in what is a foreign conflict, an internal affair or Myanmar,” said a top Indian military official , but he was not willing to be named.

India is, however, upset with the AA which has been disturbing its Kaladan Multi Modal Transport project.

Last year, the Indian Army initiated Operation Sunrise against the Arakan Army to push them out of South Mizoranm and their temporary bases were demolished.

AA leaders have said they were not disturbing China’s Kyaukphyu project in the Rakhine province that involves a deep sea port and a special economic zone because “China recognizes us, while India doesn’t”.

Indian intelligence officials say that indicates the Chinese have bought off the AA with cash and weapons, perhaps both.