India keen to participate in 50 years of Bangladesh’s independence 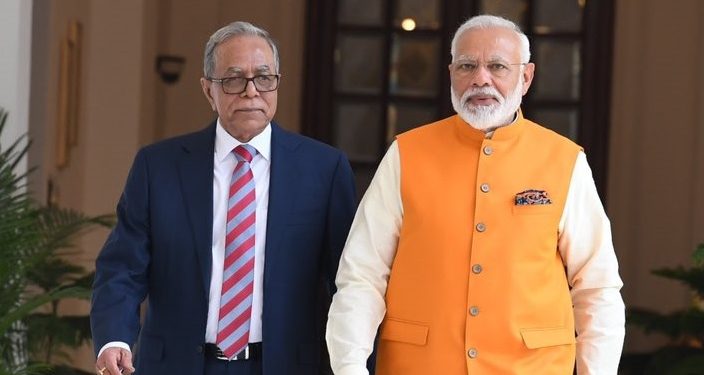 India on Friday expressed keen desire to participate in the golden jubilee celebration of Bangladesh’s independence and the birth centenary of Bangabandhu Sheikh Mujibur Rahman.

Prime Minister Narendra Modi conveyed this gesture at a meeting with Bangladesh President Abdul Hamid in New Delhi on Friday.

Bangaldesh President Hamid was in the national capital to witness the Swearing-in ceremony of Modi for his second consecutive term as prime minister and other ministers on Thursday.

According to a report that quoted the press secretary to the Bangladeshi President, M Joynal Abedin, Prime Minister Narendra Modi has viewed that if the two countries take a joint effort to celebrate the golden jubilee of Bangladesh’s independence and the birth centenary of Bangabandhu Sheikh Mujibur Rahman, it will receive global attention.

It is learnt that Modi has expressed his belief that the initiative will also play a role in the development of bilateral and multilateral relations.

Hamid and the Bangladeshi delegation returned home later on Friday.

Bangabandhu Sheikh Mujibur Rahman, the architect of Bangladesh, was born at Tungipara in Gopalganj on March 17, 1920. He spearheaded the liberation struggle and Bangladesh emerged as an independent country from Pakistan in the year 1971. India had played a decisive role in the liberation war of Bangladesh.