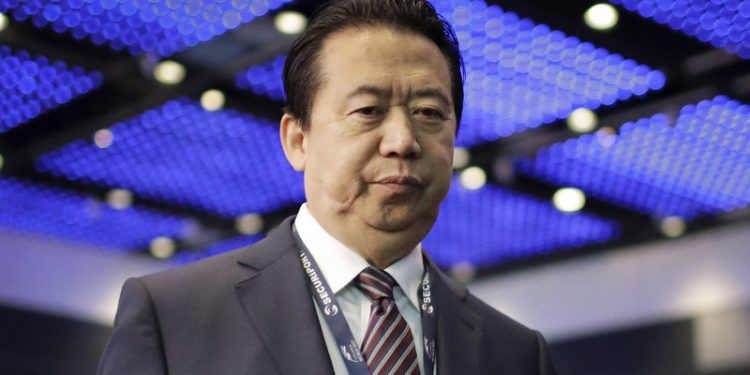 Former Interpol boss Meng Hongwei will undergo trial in at Tianjin in China for accepting bribes.

According to the Supreme People’s Procuratorate notification Hongwei’s case would be tried in the Tianjin No 1 Intermediate People’s Court.

“The National Supervisory Commission had concluded its investigation into the alleged corrupt acts of Meng Hongwei,” said the notification.

It, however, has not specified when the trial would be started.

According to the announcement, the accused abused his position as a vice minister of public security and head of the maritime police to receive a large number of bribes.

The statement added that the amounts involved were huge and that Meng should face criminal charges in accordance with the law, Efe news reported.

On April 24 this year, the Supreme People’s Procuratorate announced the issuance of a formal arrest warrant for Meng, who was held without formal charges and whose whereabouts were unknown since September.

Earlier on March 26, Meng was expelled from the Communist Party of China and stripped of all of his positions for allegedly committing serious violations of the party’s law and discipline.

The former Interpol chief mysteriously disappeared after boarding a plane heading to China on September 25, 2018.

Meng’s family lost track of him, and his wife Grace, who lives in France, reported him missing and called for help.

After several days of silence and under pressure from the international community, which demanded explanations from China about Meng’s whereabouts, the National Supervisory Commission, a Chinese anti-corruption agency, confirmed in early October that Meng was being detained.