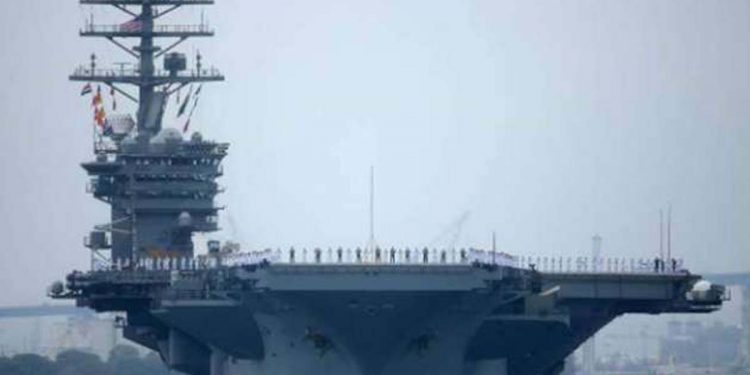 Tensions heat up in the South China Sea as the US Navy conducted exercises with two of its aircraft carriers in the disputed region.

Such an exercise has been conducted by the US for the first time in six years, say media reports.

The US Navy has brought carriers together for such shows of force in the region in the past, but this year’s drill comes amid heightened tension as the United States criticises China over its COVID19 response.

The US carriers arrived in the region as China wrapped up its own set of naval exercises near a disputed island chain, an apparent synchronicity not lost on Beijing’s state media, which carried reports boasting of the country’s readiness to repel any US attempt to challenge its claims.

The Navy aircraft carriers conducted the operations and exercises in the contested waters on “in support of a free and open Indo-Pacific,” the Navy said in its statement.

Another report quoted Lt. Cmdr. Sean Brophy, a spokesperson aboard the Reagan, as saying that it is the first time two US carriers have operated together in the South China Sea since 2014 and only the second time since 2001.

“These efforts support enduring US commitments to stand up for the right of all nations to fly, sail, and operate wherever international law allows,” the US Navy stated.

Meanwhile, China’s foreign ministry said the United States has deliberately sent its ships to the South China Sea to flex its muscles and accused it of making efforts to drive a wedge between the two countries in the contested region.