Not an inch of our land can be taken away: Rajnath Singh at Ladakh 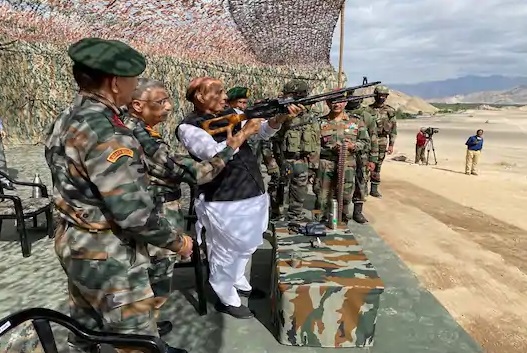 Rajnath Singh said this during his visit to Ladakh where he conducted a comprehensive review of the security arrangements.

India is not a weak country and no power can touch even an inch of its land, defence minister Rajnath Singh said on Friday.

Singh said this during his visit to Ladakh where he conducted a comprehensive review of the security arrangements in the region amid border tensions with China.

“Talks are underway to resolve the border dispute, but to what extent it can be resolved I cannot guarantee. I can assure you, not one inch of our land can be taken by any power in the world,” Singh said.

He said that if a solution can be found through talks, there is nothing better.

Singh also said that India would not allow the sacrifice of the soldiers to go in vain.

His visit comes two weeks after Prime Minister Narendra Modi’s surprise trip to Ladakh on July 3 during which he addressed troops and emphasised on the country’s resolve in dealing with the India-China border dispute.

On July 3, Prime Minister Narendra Modi had made a surprise visit to a forward post in Nimu, Ladakh, and interacted with the troops at a height of 11,000 feet.

“The age of expansionism is over, this is the age of development. History knows that expansionist forces have either lost or were forced to turn back,” he said, addressing soldiers during the visit.

“The weak can never accomplish peace, the brave do,” the Prime Minister had said.