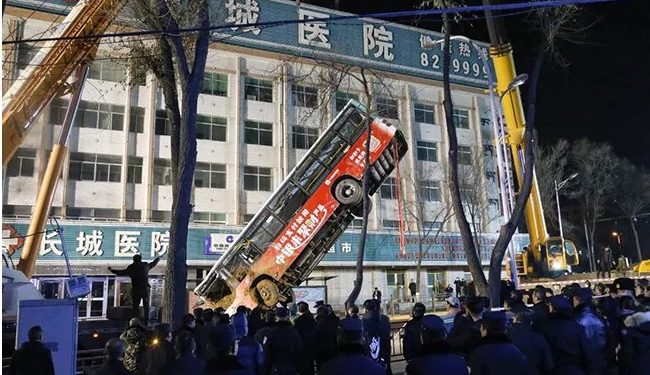 A bus plunged into a sinkhole in a northwestern city in China, killing six people and leaving ten more missing.

As per reports, the incident happened outside a hospital in Xining, the capital of Qinghai province, at 5.30 pm on Monday.

Moreover, footages show that the bus sank halfway into the ground after jutting into the air.

Video footages also show that the disastrous accident also triggered an explosion inside the hole.

Several people disappeared into the sinkhole as it spread, including what appeared to be a child.

16 people were also taken for treatment inside the hospital near which the accident had occurred.

Some 1,000 emergency workers and 30 vehicles were sent to the site and investigation work is being carried out.

Huge sinkholes are often found at most places in the country with its fast paced work of construction of roads, tunnels, bridges and other infrastructure to keep its economy strong.