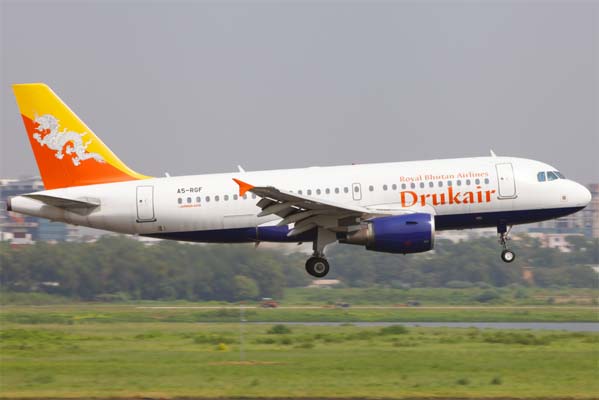 However, this is not the first time the airline has flown chartered flights to destinations other than its scheduled sectors. Between August 27 and September 2 last year, Drukair flew two chartered cycles to Kuala Lumpur. Another three cycles were completed between December 15 and 26 last year.

Drukair officials said chartered flights are operated on the request from agents, both local and international. The service is also provided on a first-come-first basis after completing all the scheduled flights and after deploying the necessary requirements for a chartered flight.

The airline had also received queries for chartered flights in Vietnam, Indonesia, Taipei and Penang in Malaysia. Officials said that negotiations are ongoing to materialise the operations in these countries.

Meanwhile, Drukair has decided to add one more aircraft, Airbus A-320 NEO to its fleet. The Airbus will have a seating capacity of 140 (20 Business and 120 Economy) along with spacious interiors, improved safety features and additional entertainment facilities.

Drukair currently has four aircrafts – three Airbuses and one ATR.

Drukair CEO, Tandi Wangchuk, said that with the increasing trend in a number of air travellers each year, it was important for Drukair to expand its fleet in order to meet the future demands. “Further with the current fleet we are not able to add any new routes.”

With the new Airbus in place, Drukair will also expand its international routes to Dubai and Japan.

The Airbus would cost around Nu 3.3 billion (B).

Tandi Wangchuk said that the airlines would bear the entire cost by raising 70 percent loan and putting in 30 percent equity. The aircraft is expected to arrive within the first quarter of 2020.

On the domestic operations, Drukair is exploring measures to purchase a new ATR-42-600. At the same time, the airline is also planning to sell the existing ATR42-500 and get another one on the lease.

Tandi Wangchuk said with the recent experiences of providing domestic services with one aircraft, they found it difficult to provide the required level of reliability.

He said the ATR42-500 is almost 15 years old, after which the resale value of the aircraft drops sharply. “Considering these two factors, Drukair decided to operate with two ATRs (ATR-42-600) and one on lease and one owned. We are going to lease one as soon as possible but ATR 42-600 is not readily available for lease.”

Tandi Wangchuk said that the airline is in discussion and negotiation to order the new ATR-42-600 and sell existing ATR-42-500.

The new ATR will join the fleet towards the second half of 2019.

The CEO said that Drukair hopes that with the sale and purchase, they may only have to raise 70 percent of the cost of new ATR as a loan. “The government has indicated its support by issuing a sovereign guarantee for loan and absorbing the interest of the loan.”

Currently, Drukair operates twice a week to Yonphula (mostly via Bumthang). Operations to the Gelephu domestic airport is minimised due to wind curfew period.

The wind curfew period in Bhutan starts from February till May 15, during which all operations in and out of Paro has to be completed by 12 noon.

During the wind curfew period, the wind speed picks up and also causes wind shears and considering the safety of passengers and aircraft, operations are limited.