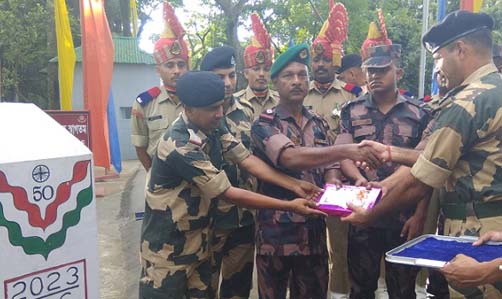 Bangladesh has urged India to stop “border killings of trespassers” by the Border Security Force (BSF).

Asaduzzaman Khan, home minister of the country, on Friday said it was “misunderstanding” and “argument” between the Border Guards Bangladesh (BGB) and its Indian counterpart which led to the firing incident on October 17.

A BSF jawan was shot dead and another critically injured after Bangladesh’s BGB opened fire at them after a flag meeting along the international border of River Padma in Murshidabad district.

“Our officials from the fishery department and the BGB were deployed in the area to protect ‘mother Ilish’ (Hilsa fish) from illegal fishing as they lay eggs during this season in River Padma,” News 18 quoted home minister Asaduzzaman Khan as saying.

“They noticed Indian fishermen entering our territory and indulging in illegal fishing of Hilsa. The BGB caught them but later released two and kept one in custody. Then BSF came in a speed boat and there was some altercation which led to the firing. It was purely an accidental case,” he said.

The BSF claimed that the BGB patrol did not release Indian fisherman and also tried to “cordon off” the BSF troops which is when the firing took place.

But Bangladesh home minister insisted that “no one tried to cordon off anyone. There was some misunderstanding and altercation and firing took place.”

Khan said no discussion has taken place with his Indian counterpart Amit Shah yet on the entry of Indian fishermen and the firing incident.

“But yes, during our meeting in India, I asked him to look into the border killing. Yesterday, again, one Bangladeshi national was killed at the Dinapore border.”

A departmental inquiry has been set up against BGB jawan Sayed and the Director General of Border Guards, Major Shafeenul Islam, has been asked to submit a report at the earliest, he added.