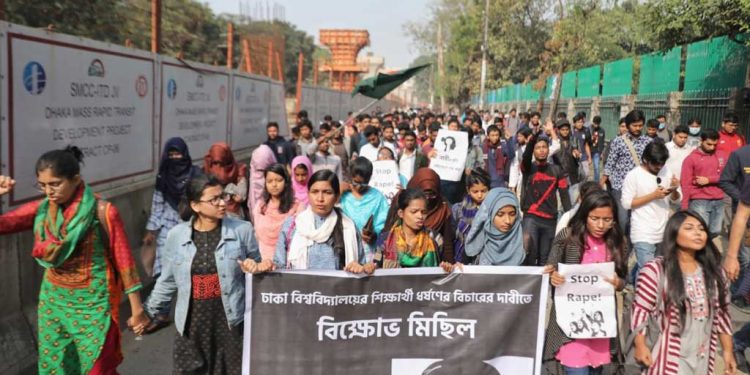 Massive protests have broken out in Dhaka University (DU) over the rape of a female student of the university at Kurmitola in Dhaka.

A girl student was allegedly raped by an unidentified man on Sunday night near the Kurmitola General Hospital, just a few metres away the Airport Road, Daily Star reported.

The incident took place when the second-year student was walking from the Kurmitola bus stop to a friend’s house in the nearby Sheora area.

The university students on Monday protested throughout the day.

At one point, they gave the authorities a 48-hour deadline to arrest the perpetrators, warning that they would wage a tough movement if their demand was not met.

Many students also took to social media to express their anger at the lack of women safety in the country.

No arrest has been made in the case so far.

Criminal Investigation Department (CID) officials on Monday collected evidence, including a wrist watch and a key-ring, from the crime scene.

According to the victim’s friends, she was also tortured besides being raped.

Dhaka University vice chancellor Akhtaruzzaman on Monday said the university authorities would do everything necessary so that the victim gets justice.

Rights body Ain O Salish Kendra condemned the incident and said that increasing violence against women has become one of the major concerns in our lives.

“It is undoubtedly a weakness of the state that it cannot ensure the environment conducive to women’s safe movement,” Daily Star quoted Kendra as saying.

A total of 1,413 women in Bangladesh were either gang-raped or subjected to rape last year.

Of them, 76 were killed after rape and 10 others died by suicide, according to the rights body.