The separatist Arakan Army (AA) fighting Myanmar troops in an intensified conflict in the coastal province of Rakhine and the neighbouring state of Chin has managed to land and bring in a huge consignment of weapons and ammunition through Bangladesh’s Chittagong Hill Tracts.

The consignment containing 500 assault rifles, 30 Universal Machine Guns, 70000 rounds of ammunition and a huge stock of grenades was brought in by sea and offloaded at the Monakhali beach not far from the coastal junction of Myanmar and Bangladesh in the third week of February.

Definite evidence has surfaced that the consignment had a trouble-free landing at the Monakhali beach near Whaikyang (Wyakuang in Burmese) on February 21 night. Nearly 150 Rakhine porters drawn from various villages of Chittagong Hill Tracts in Bangladesh and accompanied by 50 fighters of Arakan Army carried this consignment on foot and mules through Gundum and Rejupara, Uhalapalonh and Paglirara crisscrossing the very hilly border region.  Skirting the Matamuhuri-Sangua wildlife sanctuary, the column skirted Singpa and reached the Arakan Army camp at Sandak(Mro) near Thanchi on March 2.

The nearest Bangladesh army camps hardly send out patrols in these hilly terrain and the cantonment of Alikadam is far away.

Bangladesh army and navy have not conducted any operation against the Arakan Army in recent years and it was not surprising that the AA consignment could be landed without an interception.

“It seems the Bangladesh forces in the area look the other way and do not disturb the AA both because it is a strong force and also because it is creating a huge problem for the Myanmarese forces that generals and admirals in Dhaka and Chittagong may not be very unhappy about,” ” one top source in Cox’s Bazar said. He was unwilling to be named for fear of harassment by security forces who resent sensitive disclosures.

Myanmar-Bangladesh relations have worsened in recent years over the Burmese pushout of nearly one million Muslim Rohingyas that Bangladesh has been forced to shelter.

So unlike the Indian army attacking AA bases in southern  Mizoram and even conducting ‘Operation Sunrise’ last year in a bid to get their Kaladan Multimodal project operationalised, Bangladesh can afford to look the other way because it has no stake in Rakhine.

Another top source in Chittagong says that Bangladesh intelligence has received unconfirmed reports that the Burmese military is trying to develop close links with the former rebels of Shanti Bahini in the Chittagong Hill Tracts to use them in the area against the Arakanese and Rohingya rebels.

“Bangladesh intelligence closely follows any possible effort to revive the Shanti Bahini and they realise that in view of strong Delhi-Dhaka relations, only the Burmese could use these Buddhist tribal insurgents in future,” the source said.

After carrying the huge consignment to Sandak(Mro), the AA has smuggled the arms into Rakhine using the Parva corridor in South Mizoram here the local Khumi villagers are friendly to the insurgents. 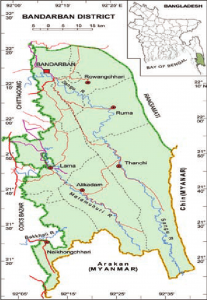 The Assam Rifles which guards this frontier has thin deployment in the Parva area because Mizoram is a peaceful state and there is no local insurgency. So after mobilising additional troops for ‘Operation Sunrise’ in which some AA bases in South Mizoram were demolished, the Assam Rifles had to pull back most of them for deployment in other insurgency affected states of Northeast India.

Top sources in Assam Rifles confirmed that they have ‘credible reports’ of movement of an arms consignment of Arakan Army through the Parva corridor in the Mizoram-CHT-Chin trijunction in March. “But our estimates are the consignment consisted of 200 rifles and about 40000 rounds of ammunition,” a top AR official said.

It is possible that AR’s intelligence cell would have picked the smuggling of the consignment in the later stages of Arakan Army effort and missed out on the actual scale.

A top expert on Asia’s arms trafficking based in Bangkok told this writer that the Chinese state-owned ordnance company Norinco supplies non-state actors like Arakan Army using some fronts. They have done these for northeast Indian rebels in the past. The expert did not wish to be identified because of possible Chinese counter-measures resenting the disclosure.

He said TCL, a Norinco front, loaded the consignment on a ship at Heibei, a small fishing port in South China in the early part of February, even when the Corona pandemic was raging in China. A TCL manager Lin who also goes by the name of Yuthna was instrument in loading the cargo on the ship. It is not clear whether the AA has paid TCL or whether the Chinese intelligence would have organised covert payment.

The AA is said to have strong links with China since its formation in Kachin in 2009. Its spokesman Khaine Tukkha recently said “China recognises us while India does not” which explains why AA does not disturb the Chinese deep seaport at Kyaukphyu but kidnaps and badgers Indian construction workers involved in the Kaladan project.

After the consignment was carried into the Sandak (Mro) base near Thanchi, it was taken in small batches on the Thanchi-Naikhong-Farua-Parva-Paletwa route.  That the AA has concentrated much strength in Paletwa which is in Chin state bordering Mizoran is perhaps because it is easier to reach arms consignments brought by sea to Paletwa rather than across the Rakhine coast where the Burmese navy is active.

One Rakhine source close to AA said that the consignment brought by AA includes “one of two” F-6 Chinese Manpads capable of shooting down helicopters, drones and combat aircraft that the Burmese army Tatmadaw is now using against the AA formations in both Rakhine and Chin. The Chinese have earlier supplied Manpads to the United Wa State Army, which is so strong that the Tatmadaw does not dare attack it.

The TCL connection has earlier figured in a successful NIA case investigating an attempt by the rebels of the National Socialist Council of Nagaland(Issam-Muivah) to bring in a huge consignment of weapons by the same Monakhali-Wyakaung route in 2010. NIA arrested NSCN ‘chief of procurement’ Anthony alias Nikkhang Shimray and secured the extradition of Chinese-Thai descent arms smuggler Willy Naruenartwanich alias Willy Narue to stand trial in India.

But under pressure from NSCN(I-M) whose negotiations with the Indian government is now in its final stages, Delhi released Shimray, who had been earlier been picked by Indian intelligence at Kathmandu airport and booked under NSA.  Willy also had to be let off and the case practically closed down.

“Willy had told Thai police and then the NIA that the arms consignment for the NSCN was to start from Beihei port in South China Sea near Vietnam to Cox’s Bazar in Bangladesh. On the high seas, the consignment was to be shifted to small fishing trawlers to reach Bangladesh, and then to the Northeast,” said a top NIA official, but again wishing to remain anonymous.

The NIA had extracted crucial information about Willy’s contacts and their bases in Bangladesh and had pushed the  Bangladesh government to break the supply chain of arms for the Northeast rebel groups. Willy, of Thai-Chinese origin, was one of the four accused chargesheeted by the NIA in its case number RC-01.

The case was registered by the agency in 2010 in connection with the alleged conspiracy by NSCN (I-M) leaders Anthony Shimray, T.R. Cavlin and Hangshi Ramson, to procure arms and ammunition from China. They were, however, forced to abort their plan following Shimray’s arrest in September 2010. The other two NSCN (I-M) leaders are still absconding.

According to the NIA, a middleman introduced Shimray to Willy, who runs a spa and a restaurant in Bangkok. “Shimray told Willy he wanted to procure 1,000 firearms. Willy introduced Shimray to Yuthna, who is a representative of a Chinese firm called TCL in 2007. TCL is a front for Chinese arms manufacturing giant Norinco and through TCL they have planned to procure the arms and ammunition,” the NIA official told Easternlink when it tried to seek background information on the Chinese link with arms trafficking to Northeast India through the Bangladesh route that is now being used by the Arakan Army.

According to him, Shimray had paid $700,000 to TCL through Willy in May, 2009. He said the NIA has emails exchanged between Shimray and Willy and electronic receipts sent to Shimray for the payment.

The source said the payment was made to the Chinese firm through normal banking channels via a leading private bank’s branch in an African country.

“Willy had also allegedly helped Shimray to get an end-user certificate from Laos, which needs to be submitted to the arms manufacturing companies before the purchase and later to the shipping companies for shipment,” he said.

In April-May 1995, the Indian army had intercepted a group of Naga, Manipuri and Assamese rebels which was carrying into Northeast a huge consignment of weapons that had been landed at Wyakaung. 38 rebels were killed and 110 arrested by the 57th Division of the Indian army in “Operation Golden Bird” which this writer, then the BBC’s East-Northeast India bureau chief, had extensively reported on.

The AA rebels now seem to be using the same route inside Bangladesh (Wyakaung beach to Thanchi to Parva in Mizoram) that the northeastern rebels have used before.