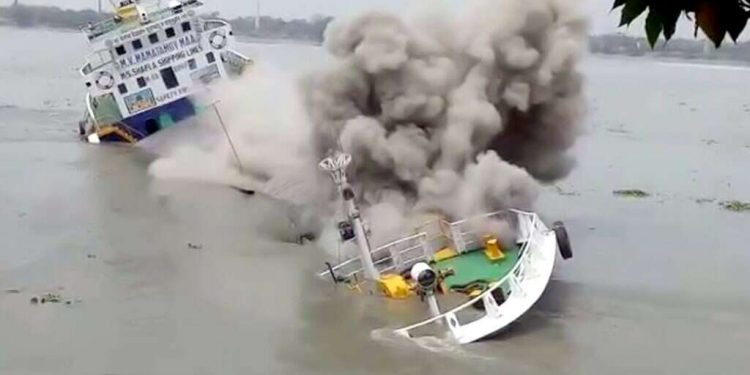 All 13 crew members of the Bangladeshi ship Mamatamoyee Maa were rescued.

A Bangladeshi cargo vessel carrying fly ash sank on Thursday in the Hooghly river after hitting a dispatch vessel of the Kolkata Port.

All 13 crew members of the Bangladeshi ship Mamatamoyee Maa — which was returning home with the load from a CESC thermal power plant — were rescued, a Kolkata Port Trust official said.

Following the damage, the Bangladeshi ship’s sailors brought it close to the jetty at Maheshtala in Budge Budge and even tried to tie it to a tree to prevent it from going down.

However, the tree got uprooted due to high tide and the ship started sinking.

An official said there was a technical failure on Mamatamoyee Maa and a crack in the hull following the collision. The KoPT ship Ravindra also suffered partial damage.

A KoPT official said despite repeated warnings the Bangladeshi vessel had intruded into the route designated for KoPT ships.

The KoPT chairman has ordered an inquiry into the incident.