Nearly 738,000 members of the Muslim minority community had to flee to the neighbouring nation due to Myanmar Army offensive 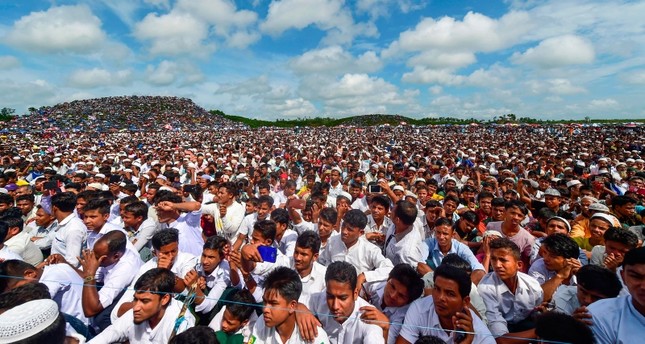 Thousands of Rohingya refugees in Bangladesh take out a massive protest rally on Sunday.

Thousands of Rohingya refugees in Bangladesh took out a massive protest rally on Sunday, marking “Genocide Day” on the second anniversary of a Myanmar military offensive.

Nearly 738,000 members of the Muslim minority community had to flee to the neighbouring nation due to the offensive.

The refugees gathered at the massive Kutupalong refugee camp in Cox’s Bazar, carrying different banners and placards that sought dialogue with Myanmar authorities before they return home, reports Efe news.

The protest came less than a week after a fresh move by the Bangladesh and Myanmar authorities to start their repatriation failed as no Rohingya agreed to return.

A similar move had also failed last November as the refugees refused to return home unless their rights were assured.

“We would like to go back home with our rights as citizen, our safety and security and in our original land. We want a dialogue with Myanmar government about our rights,” Mohammad Jubair, a leader of Arakan Rohingya Society for Peace and Human Rights, told Efe news.

The rally ended with special prayers for victims of the offensive.

Bangladesh police said the rally at Camp-4 near Madhucharara, which was attended by about 100,000 Rohingya, ended peacefully.

“Rohingyas held several rallies in several places of Kutupalang and Teknaf today. About 100,000 Rohingyas joined in the biggest one in Camp-4,” said Nurul Islam Majumder, an officer at a police station in Ukhya sub-district of Cox’s Bazar.

“It ended peacefully. We have deployed enough forces to prevent any untoward incident,” he added.

The refugees have been living in poor conditions in the world’s biggest refugee camp in Bangladesh’s Cox’s Bazar district.