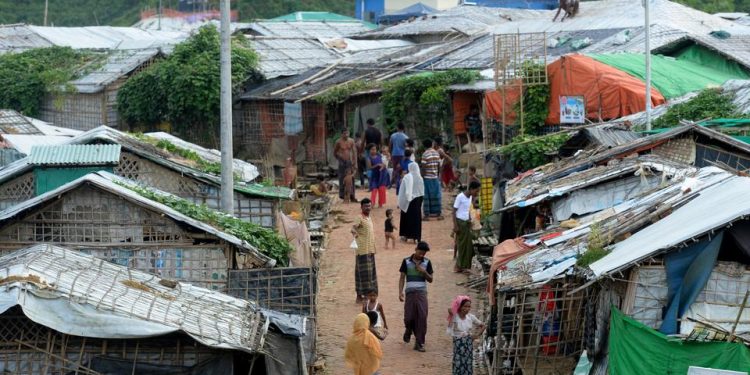 Rohingya refugees in a camp in Bangladesh. (File image)

Bangladesh on Monday asked its telecommunication operators to shut down mobile services to the Rohingya camps which are inhabited in millions by people of the tribe in the southeastern part of the country.

Morover, the telecommunication operators are also asked to submit reports on the actions they have taken to shut down networks in the camps.

The order came due to a recent surge of violent incidents in the camps.

As per reports, some Rohingya people have been found to be involved in the murder of a local ruling party official named Omar Faruk.

Four Rohingyas have already been shot dead in connection with the murder.

Morover, local people have also protested against Faruk’s murder by vandalizing shops visited by refugees and blocking highways leading to a Rohingya campsite.

Rohingya refugees have said the recent bloodshed has created an atmosphere of fear in the camp, where security has been tightened.

However, the Bangladesh police are hopeful that this move will help in bringing down the number of criminal activities committed by the Rohingyas living in the camps.

The police claimed that a number of cases of drug trafficking from Myanmar have been filed against most of the Rohingya refugees.

Apart from drug trafficking, many Rohingya refugees have been found to be involved in robberies and murders.

The Rohingyas said that the ban would affect most of them severely and they would not be able to talk with their relatives living in other parts of the world.

Many Rohingya refugees rely on remittances sent by their diaspora and usually receive phone calls informing them of the money transfers.

Bangladesh had also earlier tried to disrupt telecommunication services to Rohingya refugees but had not been successful as many markets selling mobile sets and SIM cards came up near the camps.

Rohingya refugees fled from Rakhine state of Myanmar to Bangladesh in large numbers two years ago following a military crackdown on the Muslim Rohingya minority.

The recent repatriation of the refugees to Myanmar also failed as most of them refused to go back to their homeland.