The humorous confrontation with Jupiterians, an old man transformed into a youth once again and the horrific earthquake of 1950, not a natural phenomenon but manmade, are among the tales contained in a book brought out by the Sahitya Akademi recently.

Axomiya Kalpabijnan Galpa Sankalan, an anthology of Assamese science fiction stories has been compiled and edited by Santanoo Tamuly.

The selection containing 23 of the best science fiction stories in Assamese is sure to tickle the funny bone, horrify the senses, stretch the imagination and above all keep one enthralled in the fantastic images and scenes created by the few science fiction writers that the State has produced.

Tamuly, who has also included one of his stories, Pani, said that science fiction writing has not found much favour by writers in Assam and compared to the West, the output has been negligible.

“The compilation of the stories which has been brought out by Sahitya Akademi are samples of the variety in short stories we have in this genre but as has been mentioned there is a glut in the output of this kind of fiction in Assamese literature today, ” he said.

Tamuly said that Assamese literature should have more of science fiction and these should be translated into Hindi, English and other Indian languages for wider readership.

In the preface to the book, Tamuly traces the beginnings of science and fantasy fiction in Indian, Greek, Arabic and European literature, the popularity and translations of science fiction writers like Mary Shelley, Jules Verne, H G Wells and Arthur Conan Doyle.

In India, he begins by mentioning West Bengal’s Jagdish Chandra Bose’s Nirudesher Kahini as one of the first science fictions written in 1875. Writers of Kerala and Punjab also find a place in the preface.

The early science fiction had more of comic elements and it could be said that science fiction came of age in Assam with Awaaz and Gahbar written by Saurav Kumar Chaliha and Bhabendra Nath Saikia respectively, Tamuly writes.

‘Awaaz written by Saurav Kumar Chaliha in 1950, is on noise pollution when the term was itself unknown to world; Bhabendra Nath Saikia’s science fiction, ‘Gahbar‘ written in 1968 is on a Negro youth’s heart which was transplanted in a white person.

Tamuly’s Pani written in 2008 is almost contemporary in its storyline which narrates how the Chinese while diverting the waters of the Brahmaputra inadvertently trigger the great Assam earthquake of 1951.

Among the other interesting stories are Abhinn Hriday by Dinesh Chandra Goswami, Basopojogita by Hare Krishna Deka, Pratyabartan by Vikram Majinder Baruah and Barah Bandana by Abhijit Sharma Baruah among others. 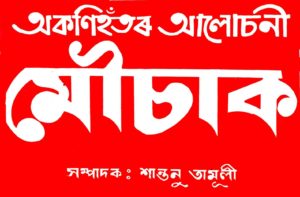 Santanoo Tamuly, writer, scientist and editor of Mouchaq, a children’s magazine and science magazine Natun Awiscar,  said that the book incorporates the earliest science fictions, Birasotiyar Desh and Roxayan, written in Assamese by Har Prasad Baruah and Nagendra Nath Choudhury in 1937 and 1938 respectively and the latest Antim Ghatak by Dibyajyoti Bora in 2017.

Tamuly’s children’s magazine ‘Mouchaq’, which was a staple diet for kids and juveniles growing up in the eighties and nineties sans the internet and still engrosses with its articles and snippets from all over the world, is now part of the Assamese syllabus to be studied as contemporary Assamese literature in Lakhimpur College (autonomous) in the post graduate level from this year.

Another one of his novels ‘Electronic naamor lora tu’ is incorporated in the post graduate Assamese literature syllabus of Assam Women’s University in Jorhat.