Now tobacco consumers will find a quit line number on the tobacco pack itself – to help users quit the addiction.

Union Ministry of Health and Family Welfare, in its notification dated April 3, 2018 has announced that tobacco packs will have new pack warnings covering 85 per cent of pack area, with pictorial images, text messages and the quit line number.

The new warnings will come into effect from September 1, 2018. The text messages will be TOBACCO CAUSES CANCER and TOBACCO CAUSES PAINFUL DEATH. A quit line number 1800-11-2356 will also be printed on the pack.

The Government has introduced a Quit Line looking at the results of Global Adult Tobacco Survey (GATS) report of 2017 in which indicated that 62 per cent of cigarette smokers, 54 per cent of bidi smokers and 46 per cent of smokeless tobacco users thought of quitting because of pictorial warning label on tobacco products.

According to Voice of Tobacco Victims (VOTV) Assam patron and cancer surgeon of Dr B Baruah Cancer Institute, Dr Ashok Das, about 12,00,000 deaths occur every year in India due to tobacco use. 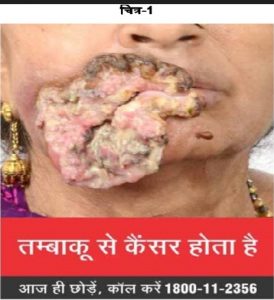 “Almost 40 per cent of the Non Communicable Diseases (NCD) including cancers, cardio-vascular diseases and lung disorders are directly attributable to tobacco use,” Dr Das said.

He further added that tobacco is responsible for nearly 50 per cent of all cancers in India and 90 per cent of mouth cancers.

Dr Das is also a member of the committee that finalized the recent pack warnings.

The graphic health warnings on tobacco packages is the most effective means to create awareness about the serious and adverse health consequences of tobacco usage especially among the youth, children and illiterate persons.

The GATS study provided evidence that large graphic warning labels are effective in increasing knowledge about risks associated with tobacco use. They also reduce the chances of tobacco initiation among youth and help the resolve of quitters not to re-start.

The new warnings were field tested/pre-tested for their efficacy with dummy packs amongst the target groups of users (both smoking and smokeless) and non-users and the participants in the focus group during the survey stated that printing of the quit line number (1800112356) on the packs was a novel idea which will motivate smokers to seek help for quitting tobacco.