A lot of patients from Myanmar have undergone surgeries here 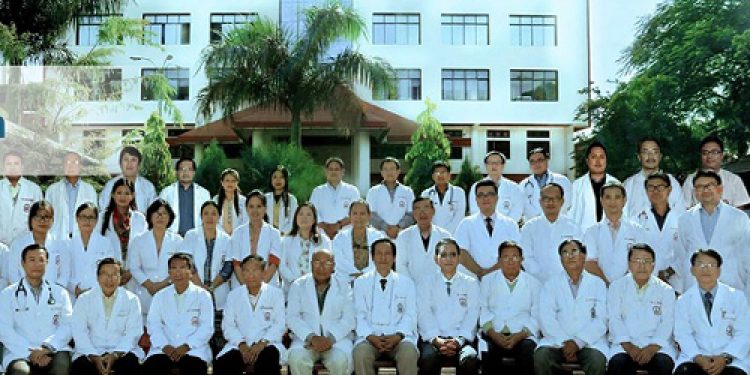 Shija Hospitals & Research Institute Pvt. Ltd popularly known as Shija Hospitals in Manipur becomes a medical destination for not only Manipur and its neighbouring states but for the neighbouring Myanmar too, according to Specialised doctors who conducted special operations at the private hospital.

A lot of patients from Myanmar have undergone Vascular and Thoracic surgeries including cardiac stents. But it is for the first time that open heart surgeries were performed on patients from another country.

According to the hospital sources, 65 old lady Tudi Maya from Myanmar was admitted at Shija Hospitals on 20-9-18 with complaints of sudden chest pain and shortness of breath on exertion. On evaluation she was diagnosed with Severe Aortic Valve Stenosis (reduced blood flow to the body due to narrowing of the valve in the large blood vessel branching off the heart). She underwent Aortic Valve Replacement under general anaesthesia on 22-9-18. She was discharged from the hospital on October 3.

Similarly another patient, Sati Maya(44) from Mandalay in Myanmar came with c

omplaint of chest pain on and off since one month and was admitted in ICU on September 20,2018. On evaluation she was diagnosed with Atrial Septal Defect, a birth defect causing a hole in the wall between the heart’s upper chambers. She underwent Intracardiac Atrial Septal Defect Repair under general anaesthesia on September 23, 2018. She was discharged from the hospital on September 28. Dr Sidartha also expressed happiness on Imphal City becoming a medical destination.

“Patients from other states including Nagaland are also coming regularly for cardiac treatment,” says Deputy Manager – Business Development Takhellambam Premkumar in a press release. “Paediatric Device Closure, a non excisional treatment for children between 0 to 18 years with congenital holes in the heart is being performed regularly under RBSK Shija Children Heart Beat.”

Recently one child from Nagaland also underwent double device closure at the hospital. Shija Hospitals is empanelled by the State Health Society, Government of Nagaland for the treatment of children born with holes in the heart under RBSK scheme.