Manipur surgeon honoured with Award for Excellence in Medicine 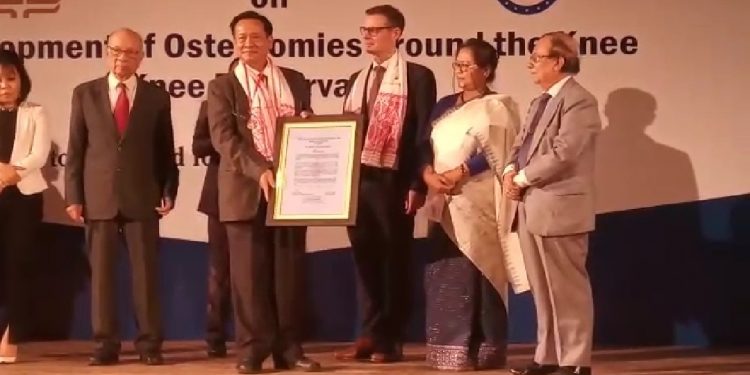 Down Town Hospital, Guwahati conferred the ‘Award for Excellence in Medicine – 2019’ for the North East India upon Dr Palin Khundongbam, plastic surgeon and managing director of Manipur based Shija Hospitals, Imphal on February 15 at ITA Machkhowa, Guwahati.

The award carries a citation, a gold medal, a memento and a cheque of Rs one lakh. Since 2000, Down Town institutes the award for the doctors who set exemplary services within and outside the State and this year Dr Palin Khundongbam has been recognized for his contribution towards his specialty and also changing the healthcare landscape of the region.

The citation states, “In the field of medical profession, if there is any man who over the years has stood for these noble virtues, defending the standing of the noble profession, always working for the betterment of others then it would have to be Dr Palin Khundongbam.”

Dr Palin has received several recognitions for his commitment towards development of healthcare and health education facilities in the region. Few of the awards that can be mentioned are, Guinness World Record in April 2003 for successful excision of largest neck tumour (40 per cent of total body weight) in the world, Top 50 Pathfinder Doctor Entrepreneurs of India by Express Healthcare Management, a publication of Indian Express Group January 2009 for his ability to grow his organization in turbulent environment like in Manipur, “NETV People’s Choice Award 2005” for his contribution in the field of healthcare business in the region, North East Excellence Award for entrepreneur for large enterprises for 2009 by Indian Chamber of Commerce and Ministry of Development of North Eastern Region (DONER), Government of India, 25 Most Influential Icons of North Eastern India by Eclectic North East Magazine in 2012, One of the 25 Healthcare Influencers of India, by Healthcare Executive magazine, a monthly publication by Hosmac.