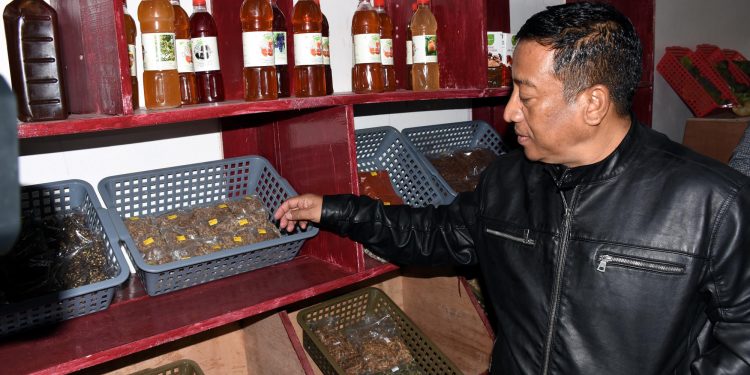 The first ever organic outlet in Manipur hills was inaugurated at Tusii Nganii Khumai (TNK) Village in Senapati district headquarters, 60 km north of Imphal on Saturday.

The outlet which is the fifth one in the State was opened by Manipur Organic Mission Agency (MOMA) under the aegis of Horticulture and Soil Conservation Department.

It was formally inaugurated by horticulture and soil conservation minister Thounaojam Shyamkumar.

Speaking to reporters, minister Shyamkumar said the Department aims to open such kind of outlets in every district so that the organic produces which are available in the interior areas of every district can be collected and sold at an appropriate place.

He said people are now adopting a healthy lifestyle and opting for chemical free food produces/products.

Sensing the need of the hour, the Department is working sincerely to open more such organic outlets and provide benefits of other schemes to beneficiaries in order to increase the livelihood of the people as well to avail organic produces to everyone, he added.

He also appealed everyone to adopt a healthy lifestyle and consume organic produces/products.

He also said the produces which are unavailable in a particular district can be sold at the organic outlet by bringing the produces from another district.

He said one of the objectives of opening such outlet is to also sell organic food produces/products in a hygienic way.

He further sought cooperation from the general public for success of all the developmental work.

In his speech, project director K Debadutta Sharma of MOMA, said since 2016, organic scheme under the Ministry of Agriculture & Farmers’ Welfare, Government of India has been continuously implemented in the State.

He said under the scheme, the department identified some of the organic food products which were then processed, branded and sold outside the State.

Stating that the organic outlet opened today will help the 1,500 organic farmers of Senapati district in selling their produces/products, he said if the Centre continues the scheme than such organic outlets will be opened in district headquarters mainly Churachandpur, Ukhrul and Tamenglong districts.

On the other hand divisional forest officer John Sha of Senapati district suggested that the MOMA under the Horticulture and Soil Conservation Department can tie up with the tribal people under the Van Dhan Vikas Kendra scheme in helping them to sell their final products.