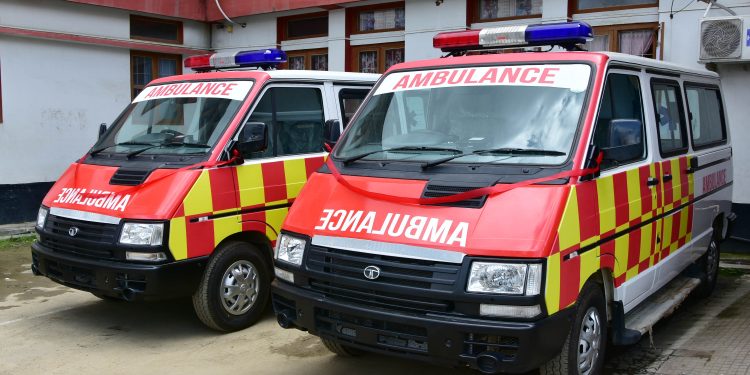 Manipur health and family welfare minister L Jayantakumar Singh distributed ambulances to the chief medical officer’s (CMO) of some districts at a function held at the Medical Directorate Office, Lamphelpat on Tuesday.

Speaking on the occasion Jayantakumar said two more ambulances had been procured by the National Health Mission, Manipur to meet the present requirement.

One will be used at CMO office, Bishnupur while the other will be utilized at Medical Directorate, Lamphelpat, he added.

Minister Jayantakumar also distributed five Mahindra Bolero SUV cars, one each for Pherzawl, Jiribam, Noney, Tengnoupal and Kakching in a function held at the directorate in the afternoon.

The SUV cars were handed over to concern chief medical officers.

The minister said the increasing need of transport vehicles for transporting people who have returned to the State during the pandemic juncture is well understood by State Government and added that the transport vehicles have also been given to other districts on a priority basis.

Jayantakumar also appealed the public to stay calm during this pandemic juncture as the Government is putting all effort to provide the necessities of the people and also to contain the pandemic.

On the government’s plan to increase the number of beds at the newly opened COVID care centre at UNNACO school campus in Manipur, he said 253 beds are ready for the treatment of COVID cases.

Informing that 75 COVID-19 patients have been admitted at the centre, he said the State Government had initially planned UNACCO COVID Care Centre at Meitram near Imphal to be a 100 bedded care centre.

However, due to the rise in the number of COVID-19 cases in the state, the Government is planning to increase the capacity.