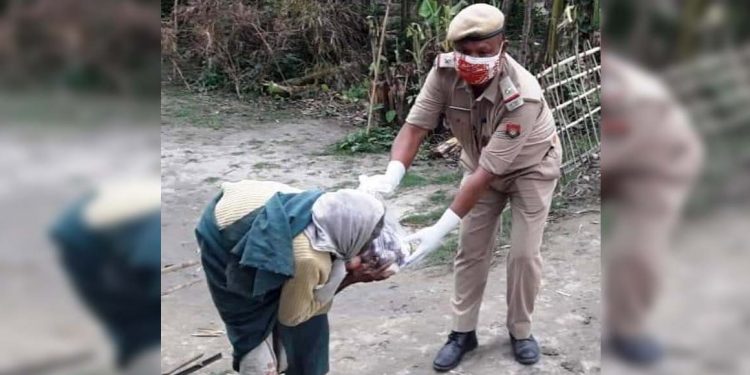 Lakhimpur Police are playing the role of a Good Samaritan by bringing medicines, which are not available in the district, to the lockdown-hit patients.

The district police recently brought medicines for a cancer patient of No. 3 Islampur village under Nowboicha constituency.

The patient, an elderly man in the village, was in need of his medicines, which were inaccessible due to the lockdown as those were procured by him only from a chemist shop in Guwahati.

The patient informed about his problem with the helpline number of Lakhimpur Police.

The district police took the matter seriously and within three days, the medicines were delivered to him.

The police delivered the medicines at the cancer patient’s residence on Friday.

Lakhimpur Police continue to deliver medicines to the patients at their doorsteps responding to the distress calls they receive through the helpline number since the imposition of nationwide lockdown in view of COVID19 pandemic.

The district police so far have delivered medicines to eight patients by procuring the same from outside the district.

Lakhimpur Police also continue to provide rations to the poor and needy people at various parts of the district since the beginning of the lockdown by instantly responding to distress calls to its helpline number.

Meanwhile, Lakhimpur Police have taken the custody of the murder accused of a person in North Lakhimpur.

The accused, 58-year-old Dilip Sonowal, who is an assistant executive engineer of PWD, confessed before the police that he had assaulted 50-year-old Dilip Gogoi, a Grade-4 employee of his office.

Gogoi was engaged as a domestic helper in Sonowal’s residence in North Lakhimpur.

Sonowal assaulted Gogoi on charges of stealing Rs. 50,000 on April 21.

Dilip Gogoi was found dead on the following day by his family members.