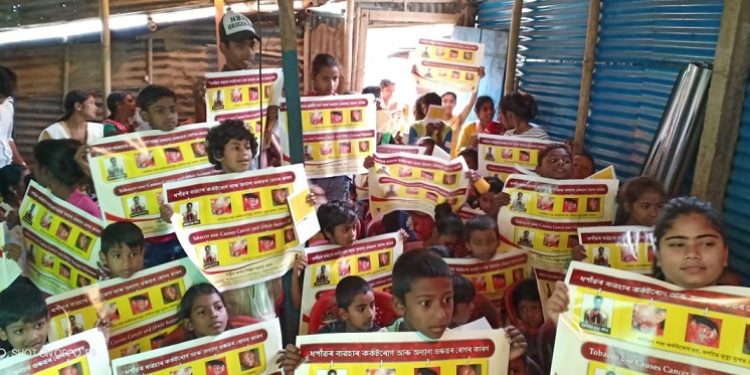 Children of the GMC slum area at Bhangagarh participating in an awareness programme on harmful effects of tobacco.

At least 70 children, their parents and friends from the GMC slum area at Bhangagarh in Guwahati were sensitized on Sunday about the harmful effects of tobacco.

The ‘awareness programme on the sensitization of harmful effects on tobacco and tobacco products’ was organized in association with CHAKSHU, stated a press communiqué.

Addressing the gathering, advocate Ajoy Hazarika, secretary of the Consumers’ Legal Protection Forum said, “An intensive survey carried out in Guwahati shows that nearly half of the vendors around schools in the city sell tobacco products.”

Vendors make loose cigarettes and bidis available for their customers which help children to access the same at cheap price.

Kakati said: “Tobacco consumption rate in this dens slum is higher than the other areas of the Guwahati city.  Consumption of tobacco and tobacco products by the children is higher because these children are the most vulnerable to such threat mostly due to the environment they are dwelling with.”

Stating that all parents should aware about the harmful effects of tobacco and tobacco products on their children, Kakati said that lack of education and uplift of children in the slums is one of the root causes of this problem.

Snehanshu Singh from Consumer VOICE, Delhi told the gathering that the density of tobacco vendors in Guwahati is too high in both commercial and residential areas and there is no record available of tobacco vendors with the government agencies.

There was an interaction session where the parents of the tobacco used children raised various sensitive questions and urge to take tobacco control measures, especially to protect their young children from tobacco menace, the press communiqué further said.

Video clips about the bad effects of tobacco and tobacco products consumption were also demonstrated at the awareness programme, it added.