COVID19: Raincoats to protect doctors on a suicide mission!

As per a news report by Cindy Wockner for 7News, Australia, published on March 25 2020, doctors and nurses in Indonesia are being forced to wear cheap plastic raincoats due to a shortage of protective gear and Hazmat suits. Authorities believe that at least eight doctors and several nurses in Indonesia have succumbed to the deadly COVID19 that is now sweeping the world. Similar trouble is being faced by healthcare workers in Kolkata.

There are two main hospitals in Kolkata that are currently dealing with infected patients, one of them is the Beleghata Infectious Diseases Hospital and the other is the Medical College Kolkata. Amid the catastrophe that has engulfed the world and brought life to a standstill everywhere, problems faced by students of Medical College Kolkata seem to be growing relentlessly.

Students share images from within the college premises where doctors are provided with raincoats as PPE. The state government sent raincoats as PPE (Personal Protective Equipment) to Medical College Kolkata that has been recently announced as a Quarantine Centre. Although there are no positive cases there yet due to the late announcement, the doctors and staff refuse to join work till they are provided with proper PPE. 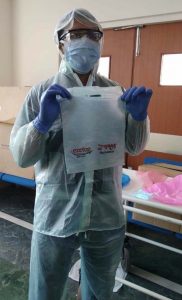 Face shield, goggles, triple-layer medical masks, N-95 respirator masks, gloves, coverall/gowns, shoe covers and headcovers are all components of the PPE which are to be used by doctors and nurses based on their risk profiles. Doctors at Medical College Kolkata are provided with poor quality gloves, foot covers received by them which should have been ankle high are not apt for usage and these doctors have to beg for masks to protect themselves.

Equipment provided to these doctors stands nowhere even close to what was suggested in the guidelines issued by the Ministry of Health and Family Welfare (MoHW) Directorate General of Health Services. Some doctors can even be seen taking a dig at the authorities referring to N95 masks as a ‘distant dream’. Apart from this, there is a serious shortage of testing kits in these hospitals and the same is the case across the country presently, at a time when there is a need for aggressive testing.

Should we let these heroes, sans capes, in hospitals and quarantine centres, go on a ‘Suicide Mission’ without providing them with basic protective equipment? If not, then where are the thousands of crore rupees worth of funds set aside for this pandemic?

On questioning the authorities, health care workers receive nothing but empty promises of proper equipment being sent to them soon. Despite perpetual efforts to raise the issue for over a week, which is a very long time considering the rapid increase in number of COVID19 positive cases, doctors and nurses continue to wage war against the virus putting their own lives at risk due to lack of basic protective equipment.