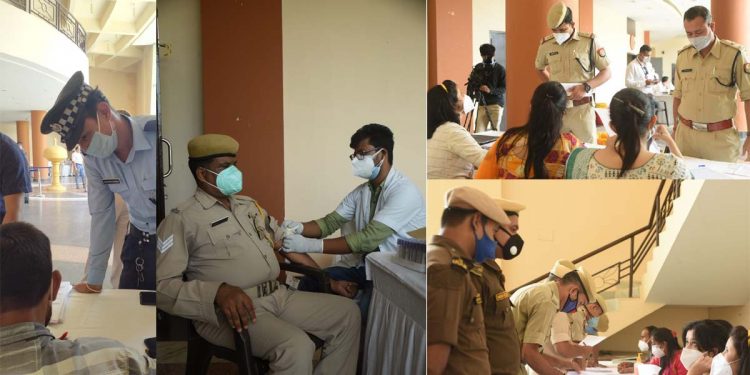 While the total number of Assam Police personnel infected by COVID19 reached 1,631 on Saturday, 67 other personnel of the state’s police force, who recovered from the disease, have donated their plasma.

The Assam Police personnel were felicitated at a function in presence of health minister Sarma and his deputy Pijush Hazarika.

“So very proud to have felicitated them in presence of Pijush Hazarika,” Sarma tweeted.

Confirming the news, Assam health minister Sarma in his latest tweet on the state’s COVID19 status said 1,457 new COVID19 cases have been detected, out of 27,161 tests conducted in the last 24 hours in the state.

The deadly disease has so far claimed the lives of 101 positive patients.

The state currently has 10,180 COVID19 active patients after discharge of 1,085 patients on Saturday.

The Khaki stands for sacrifice & compassion!

True to the spirit, 67 recovered police personnel came forwards to donate their #plasma. So very proud to have felicitated them in presence of @Pijush_hazarika @DGPAssamPolice, Pr Secy @samirsinha69 & other officials.#PlasmaTherapy pic.twitter.com/LZJcAOo9az

The Assam Police also tweeted that in response to the appeal of the chief minister Sarbananda Sonowal, the police personnel donated plasma on Saturday under the guidance of Health minister Himanta Biswa
Sarma and MoS for health Pijush Hazarika and Assam DGP Bhaskar Jyoti Mahanta.

Meanwhile, additional director general of police (law and order), Assam GP Singh in a tweet said till date, 1,631 Assam Police personnel have tested positive for COVID19, out of whom 1,162 have recovered while 4 personnel have lost their lives while fighting the pandemic.

In response to the appeal of Hon' CM @sarbanandsonwal ji, our personnel donated Plasma today, under the guidance of Hon’ Health Mininster.