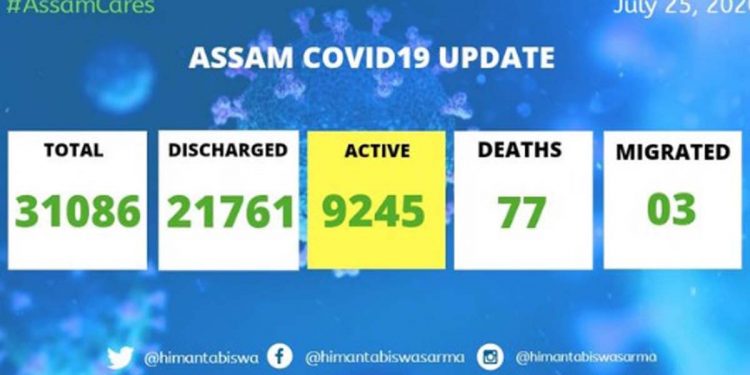 The health minister has urged the people of the state to take precautions.

With the positive cases, Assam currently has 9,245 active cases while 3 cases have migrated from the state.

A total of 21,761 patients, who were earlier infected by COVID19, have been discharged from various civil, district and model hospitals across Assam after they tested negative for the virus.

The deadly disease has so far claimed the lives of 77 people in Assam.

With the demise of one more person on Saturday, Assam’s COVID19 death toll has increased to 77.

On Saturday, a 65-year-old man from Nagaon district died of COVID19 infection at the Gauhati Medical College Hospital (GMCH).

Confirming the news, health minister Sarma in an earlier tweet on Saturday said the positive patient, who succumbed to COVID19 infection, has been identified as Ranjit Baidya, a resident of Nagaon.

?Alert ~ 1165 new #COVID19 cases detected in Assam today, with 353 incidents recorded from Guwahati and 100 from Golaghat