Police have so far booked 17 people; agitating doctors demand for stringent punishment to the accused 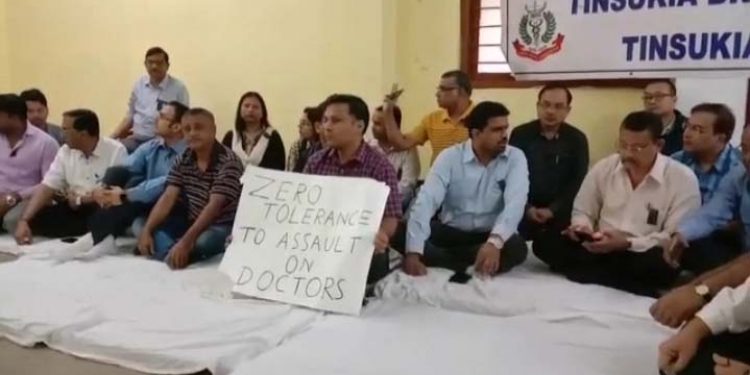 Along with other parts of Assam, the doctors, who members of the Dibrugarh and Tinsukia branches of Indian Medical Association (IMA), staged protest on Saturday.

The IMA staged a statewide protest against the brutal assault on a physician at Dikom tea estate by a violent mob of tea garden workers on May 6.

The members of IMA condemned the attack on the doctor.

The agitating doctors demanded that safety and security of the on-duty physicians and medical staff be ensured by the government.

The protestors also demanded installation of CCTV cameras in all tea garden hospitals across the state.

IMA Dibrugarh and Tinsukia branches staged sit-in protest wearing black badges from 9 am to 10 am on Saturday.

Probin Chandra Thakur, the medical officer of Dikom Tea Estate, had suffered broken bones and fractured ribs after he was brutally assaulted by a group of garden workers following the death of a woman worker during a severe thunderstorm on May 6.

The worker identified as Jhalo Surjan was crushed to death while plucking tea leaves when a tree uprooted and fell on her.

Alleging lapse on the part of the management in dispatching an ambulance, irate workers later manhandled the doctor, pharmacist and the manager of the tea estate.

Police had to rush to the spot for controlling the situation.

“We strongly condemn the assault on Dr PC Thakur, who is a senior member of the Indian Medical Association and also the vice president of IMA Tinsukia branch,” said Prashant Agarwal, joint secretary of IMA, Assam.

Informing that Dr Thakur has been serving in the Dikom tea garden for the last 30 years, Agarwal said, “Due to the violent assault, his collar bone has been broken and his ribs have been fractured.”

Dr Thakur has been admitted in a serious condition in an ICU of a private hospital in Dibrugarh.

He has been undergoing treatment for the last 6 days.

“We demand stringent punishment for the guilty persons,” said Agarwal.

“He would have died in the hands of the garden workers if the police did not save him,” he added.

Informing that two persons, who tried to save him, were also badly assaulted, Agarwal said, “Our whole doctors’ fraternity is united on this issue.”

“If the government doesn’t take concrete measures to stop such incidents, we will be forced to intensify our agitation,” added Agarwal.

Samar Jyoti Chaliha, manager of Dikom tea estate, denied any lapse on the part of the garden management in case of the tea garden worker, who died due to injuries she had received after an uprooted tree fell on her.

He said the violence, which followed the incident, was instigated by some residents who are not workers of the garden.

“There was no negligence on our part. The incident occurred due to a natural calamity at 2.15 pm. We reached the Dikom state dispensary with the injured persons at 2.45 pm. We immediately sent an ambulance and unfortunately she died,” the manager said.

Saying that they have two ambulances in the garden, the manager said, “The assault on the doctor was carried out by residents who are not workers of the tea garden. Resident non-worker is a big problem in the tea garden,” said Chaliha.

He further said, “After discussion, the workers assured that there would be no repeat of such incidents in the future but where is the guarantee that such incidents won’t re-occur.”

“Even I am afraid of working in the tea garden. Why the doctor will work in the tea belt if such things happen with them,” he said.

The police have so far taken 17 people in their custody.

“Investigation is on and there will be more arrests. The situation in the garden has returned to normal but we are keeping a close watch on the development,” said Hrishikesh Hazarika, in-charge of Dikom police outpost.

After the incident, the garden management has declared an indefinite lock-out fearing further breakdown of the prevailing situation.

The garden management has already announced Rs 1 lakh as compensation for the next of the deceased’s kin.

Recently, Chabua MLA Binod Hazarika also handed over a cheque of Rs 4 lakh to the family of the deceased.