Assam: Aids pour in for needy in Darrang amid COVID-19 lockdown 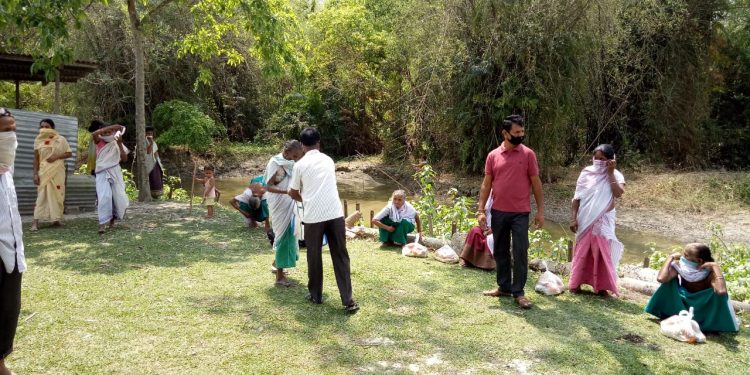 Taking time out of their busy schedule, journalists of Mangaldai in Assam’s Darrang distributed essentials among needy people amid the ongoing COVID-19 lockdown.

Members of Mangaldai Media Circle in a joint effort with local voluntary organization Crystal Vision on Saturday distributed around 130 packets, each containing essential and nutritious food on an average equal to eight to ten meals for an adult.

The food packets were handed over to the people of several villages under Mangaldai police station including Howli Bezpara, Jonaram Chowka, Jaljali, Randhani Satra and Outola at their door steps.

Meanwhile veteran PWD contractor of Mangaldai Prabhu Agarwalla has also joined hands in the efforts to prevent starvation in the district.

He has distributed more than 1500 packets of food stuff through the local MLAs of Sipajhar and Mangaldai, Darrang police administration, Sipajhar circle officer and local youth bodies of Pathorighat, Kalaigaon and Mangaldai.

Earlier he had handed over a cheque of Rs 10 lakh to health minister Dr Himanta Biswa Sarma as donation to Assam Arogya Nidhi.

SBI Pensioners, Mangaldai unit and the management committee of historic ‘Saalmash Utha’ temple of Hazarikapara have also offered donation to the Assam Arogya Nidhi with a sum of Rs 10,000 and Rs 20,000 respectively.