Over 100 Indian crew members who were stranded on board a coronavirus-hit quarantined cruise ship off Yokohama port in Japan landed in New Delhi early Thursday morning.

They were airlifted by a special Air India flight, according to reports.

‘Air India flight has just landed in Delhi from Tokyo, carrying 119 Indians and five nationals from Sri Lanka, Nepal, South Africa and Peru who were quarantined onboard the #DiamondPrincess due to #COVID19. Appreciate the facilitation of Japanese authorities. Thank you @airindiain once again.’

Officials were quoted as saying those rescued will be quarantined for 14 days at the Army camp in Manesar.

The Indian crew members were on board the ship, Diamond Princess, which had 61 confirmed cases of the novel coronavirus.

A 30-year-old, who hails from Hatipa village in West Bengal’s Uttar Dinajpur district, was among the Indian crew members on board the ship, had called for help.

He had earlier appealed to Indian authorities for help.

In videos posted on social media, he reached out to Prime Minister Narendra Modi and West Bengal chief minister Mamata Banerjee, urging them to ask the Japanese government to separately quarantine those infected and uninfected on board the ship.

“The Indian Embassy in Tokyo and our company were trying to get us back, and last week we underwent tests. Recently, the test results came negative and showed that we are uninfected,” the 30-year-old said through WhatsApp.

“Around 1 pm local time, 122 Indian crew, including me, disembarked and got into six buses at Yokohama port. We are being taken to Tokyo (Henada) airport,” he further sent on whatsapp.

“We have been told that we will be kept in quarantine at a special facility for 14 more days and will undergo tests. Thereafter, we can return home,” he said.

The luxury cruise liner, with over 3,700 people aboard, was quarantined off Yokohama port in Japan on February 3 last. 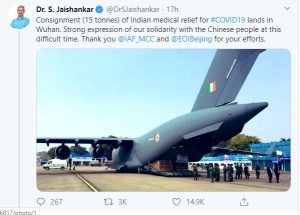 At least 700 people on the ship, including 12 Indians, had tested positive while four of them died on board due to coronavirus.

Those rescued from Wuhan will be kept at the ITBP facility in Chhawla in the national capital.