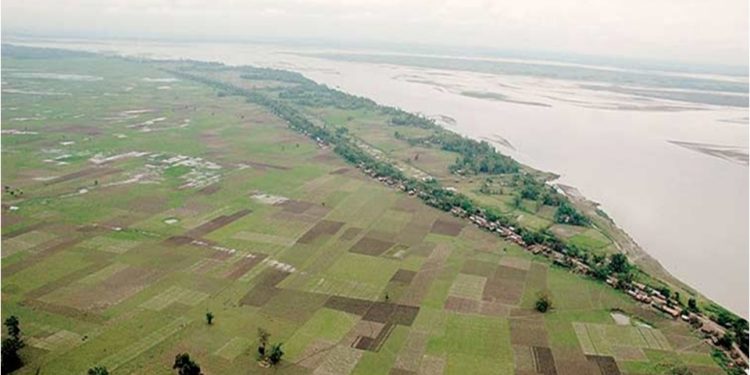 The adoption of a specific anti-erosion measure depends on the river morphology, bank materials, mode of bank erosion and above all, finance available for the purpose. Except for local and small measures taken by a few tea gardens to save their plantation, all anti-erosion works carried out in the valley have been carried out so far with public funding/ by Government.

As water is a State subject under the Indian constitution, the primary responsibility for these works lies with the State government. However, the Central government also pitches in by providing the lion’s share of the fund for state projects. On the request of State govt, it also executes few schemes through Brahmaputra Board-its agency in the valley.

Conventional AE measures so far implemented in the Brahmaputra basin, their suitability, etc are discussed in this article.

Solid spurs are structures conventionally made of boulders. These are constructed almost perpendicular to the direction of flow. In alluvial plains of the valley, solid spurs generally project out from an embankment. The portion of the spur between the embankment and actual bank is made of soil with boulder pitching near the bank. The part projecting into the river is entirely made of boulders with an adequate apron.

Solid spurs can be used for either repelling flow away from the bank or attracting flow towards the bank by altering its direction of projection into the river. The measure is suitable for the protection of towns or important infrastructures. The protection of Dibrugarh and Dhubri are the best success stories of the solid spurs constructed in Brahmaputra valley. They are also widely used for protection of the embankments on the Brahmaputra river by repelling flow away from the bank.

The use of spurs in bank protection has several limitations. They interfere with the natural flow of a river and alter its flow pattern. This can lead to an adverse impact on the downstream and in the opposite bank. Spurs are unsuitable in highly braided reaches as flow direction keeps changing in such reaches which may lead to undesired results. It is an expensive anti-erosion measure.

The availability of boulders at an affordable distance and price is a huge issue today. Conventional locations of boulder extraction in central Assam and many other areas have been banned to protect animal habitats.

Bed bars are solid submergible spurs. All principles and designs are identical to solid spurs. These are used in smaller fast-flowing rivers with river beds formed of boulders and gravel. The bed bars project into the river from the bank. Due to the decrease in velocity between bed bars, river bed materials starts accumulating and space between bed bars gets filled up. In the process, deep channel at the bank is filled up and bank erosion is automatically stopped.

Bed bars are very effective in erosion control of tributaries at locations immediately downstream of the foothills. These are submergible structures made of boulders in crates. As the location of such a structure is close to the foothills where river boulders are readily available, construction material is not a problem. It is a specific measure for a specific condition.

Permeable screens are effective in inducing siltation in locations with active erosion. As a result, these areas get silted up and erosion subsides. The screens can be installed in comparatively shallow reaches generally upstream of the erosion point and in presence of coarse sediment. It is a relatively inexpensive measure.

As early as the year 1954, wooden posts (Sal or Nahar) were used for the construction of permeable screens in the protection work of Dibrugarh town. Bamboo porcupines or pilings are in use in the valley for quite some time as permeable screens in smaller north bank tributaries. However, the introduction of RCC porcupines in 2002-03 has been a game-changer. Today, RCC porcupine screens are widely used in erosion control of the Brahmaputra river and its tributaries.

Permeable screens are unsuitable in high depth, high velocity and in presence of fine clayey sediment load.Generally, these have to be used repeatedly for 2-3 seasons to get effective results.

Bank revetment works consist of bank pitching and providing apron with boulders/ geo-bags all along the bank in an erosion-prone reach. The measure is applicable under almost any condition of flow, depth, etc. The structure doesn’t interfere with the natural flow pattern of the river in the area of its implementation or downstream. Therefore, these have no known negative impact. They are ideal measure for a comparatively long term solution.

Bank revetment is an expensive measure and needs maintenance in the initial years after construction in active erosion affected areas. Like spurs, the availability of boulders and their carriage to the worksite is an issue.

However, geo-bags have been able to successfully replace boulders to a great extent. The WRD, Assam has also used concrete blocks in the exposed portion of the geo-bag revetment at the Maijan area upstream of Dibrugarh. This is a good innovation as continuous exposure of geo-bags to the sun may drastically decrease its effective life.

This measure is specific to a braided river and done where spill channels are common. Embankments are generally constructed on the main Brahmaputra river at about 1km -1.5 km away from the river bank. Small spill channels that are formed between a bank and the embankment may gradually enlarge to a major channel and create a threat to the embankment itself. Careful observation and timely closure of risky spill channels through a tie bund help in avoiding expensive protection measures at a later date. The measure is highly economical.

The closure is generally done with an earthen embankment across the spill channel with protection through pitching and apron as per design. This is a pre-emptive measure based on anticipation. It heavily depends on the Judgment of field officials acquainted with the behaviour of the river in a specific portion.

Erosion through sloughing happens in banks formed of clayey materials in presence of inland water bodies. In such cases, drains are dug perpendicular to the bank at a certain depth and filled with coarse sand/ geo-synthetic filter materials. These drains help in draining accumulated water from the countryside to the river and avoid sloughing of the bank.

It is a measure to tackle a specific problem that is not very common in braided Himalayan rivers in most portions. However, it is useful in many South bank tributaries of the Brahmaputra.