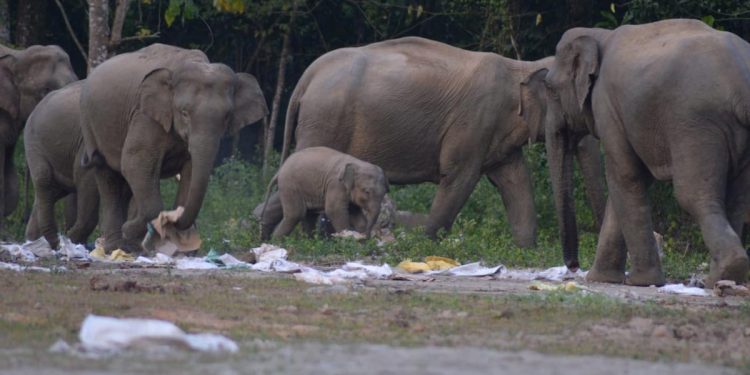 Amid the Covid-19 outbreak, when the environment had just started to see its brightest hours in disguise, several anti-environmental steps by the government have been observed in our country.

The issue with Dehing Patkai Elephant Reserve in Assam, which has caught the attention of social media lately, is one such example of development vs environment. The reserve is considered to be one of the most ecologically enriched areas of not only the state but the entire country.

The reserve is home to more than 50 species of mammals and around 359 species of birds (as per eBird-a citizen science platform for birders), including the state bird of Assam; ‘White-winged woodduck’, a critically endangered species according to IUCN.

This largest tropical lowland rain forest of the country, also hosts 34 rare species of butterflies, 54 species of amphibians, reptiles, plants, trees, insects etc. making it a unique ecosystem in itself.

The reserve, which remained unfamiliar to a wide strata of populace till date, came to limelight when a storm of online protests was observed after the National Board for Wildlife (NBWL) approved the proposal for the use of 57.20 hectares (broken area) of Saleki Proposed Reserve Forest which is within Dehing Patkai Elephant Reserve, for mining by North East Coal Field (NECF), a subsidiary of Coal India Limited (CIL).

Nevertheless, the issue of coal mining in Dehing Patkai is not something new. NECF has been mining legally in the reserve forest since 1973 to the year of the expiry of its lease, 2003, following which the mining continued illegally.

A recent RTI by one of the concerned citizens revealed that out of the claimed unbroken area of 41.39 hectares (for which the feasibility report from the user agency to pursue mining is yet to be received), an encroachment of 15 hectares have already happened for mining leaving only around 25 hectares of the forest untouched.

The clearance from NBWL also transpired at a time when the scope of expressing opinions in physical form is least given the social distancing guidelines.

The pristine land of Patkai is home to different ethnic groups of Assam like Khamti, Singpho, Moran, Motok, Ahom, Tai Phake etc. who are inhabited around the Dehing Patkai Elephant reserve.

The mining, if extended any further into the forest, might end up compromising with the habitat of the fauna giving rise to human-Animal conflicts. Other than the ecological problems, issues such as rise in land and water pollution might also trigger concerns like food scarcity, health hazards etc. within the region.

Therefore, a strict ban on the extension of coal mining is mandatory to protect the ecology of the forest as well as the adjoining human settlement.

Looking at the ongoing dependency, it seems unlikely for India to wean off its hands from Coal anytime soon. Coal, the highest contributor to thermal power plants and the primary producer of energy in India, generates employment for approximately 5 lakh people, despite it being non-renewable.

Coal India Ltd, one of largest mining companies in the world, has been contributing enormously to the state’s capital through dividend and taxes on generation of coal.

According to International Energy Agency’s report ‘India 2020’, India, world’s second largest producer of coal after China, generated 74% of electricity and 44% of total primary energy supply (TPES) from coal in 2017, making the country’s economic growth vastly dependent on this sector.

Dependency on the sector so high that the current lockdown has estimated a revenue loss of Rs 4500 to Rs 5000 crore to the key coal producing states for the financial year 2021.

After the passing of Mineral Law (Amendment) Bill 2020, government initiatives have been inclined towards utilizing domestic coal and reducing dependency on international imports. Subsequently, a rise in interest to promote commercial mining has been observed ever since.

The impending auctions which would have easy entry and exit norms without any eligibility criteria for the domestic and global miners to participate in the auction of coal blocks and mines very well supplements government’s intention to break the monopoly of CIL and promote privatization which can again be worrisome for the environment.

The national commitment to Paris Agreement-2015 and the 2022 plan to generate 175GW of renewable energy (RE) with the interest of shifting from Coal to RE still seems to be far achieved.

According to a report by BP Energy outlook, India’s coal share in energy consumption will drop only by 8% till 2040. Although the government is working to reduce the coal based pollution by adopting methods such as automation during coal transfer and promoting the use of coal gasification for the production of methanol and reduces the dependency on oil; production of coal by exploiting the above-ground natural resources still persists as there have been constant dependency and demand.

However, for a developing country like India with a futuristic plan to provide affordable electricity to each household in every corner of the state, it will be challenging to lower the dependency on coal with the existing trend of investments.

Mining, if continues, will compromise with the existence of the ecology and the environment which is the basis of life for all the living beings. Thus, emphasis should be on exploring the scientific and sustainable usage of renewable sources of energy like solar, wind, biogas etc. for which our country has proved to be a potent candidate.

Further emphasis should also be put on ‘sustainable consumerism’ to shrink the demand supply gap. Dehing Patkai, which has been a victim of coal mining, might be prevented with all the protests and activism.

It is, however, only through shifting energy sources, judicious utilization, public awareness, sustainable governance and inputs from unbiased institutions that can reduce the exploitation of ecology and environment holistically and inhibit the occurrence of Dehing-Patkai like situation from happening in any corner of the country.

Angshuman Sharma and Chandan Bora are research scholars at Gauhati University and Rupam Bhaduri is at IIT Guwahati.