Baghjan: A classic example of plunder by extracting industries on endangered ecosystems 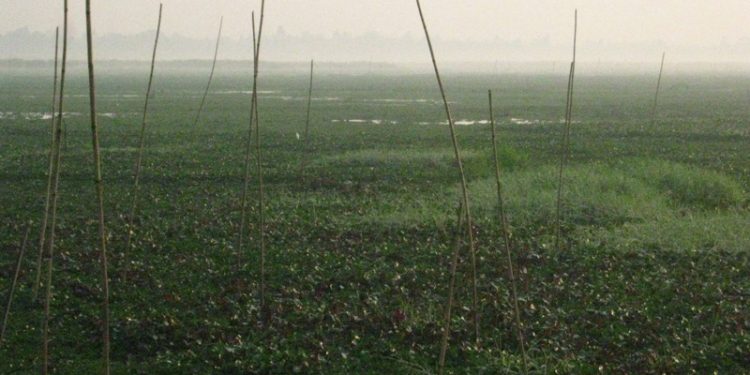 Durlov Gogoi was an alumnus of my college. An ace footballer, Durlov had been a goalkeeper in the Assam State team. His consistent excellence in the field earned him the job of a fire fighter in Oil India Limited (OIL). On June 10, Durlov’s body was recovered from a pond in OIL’s production well site in Baghjan area of Assam’s easternmost district Tinsukia.

Durlov, along with fellow fire fighter Tikheswar Gohain was pressed to service when a massive fire broke out on June 9 after a 14-day uncontrollable oil leak from the damaged oil well. The two fire fighters were reported to be missing till their bodies were recovered the next day by the SDRF-NDRF team.

As raging fire engulfed the area, burning house after house, people fled leaving everything behind for the safety of their lives. Hundreds of families from Natun Gaon village were forced to take shelter in two schools at Guijan, some four kilometers away.

On May 27 at about 10:30 am, the rig ‘DGR – Location 5’ blew out with a huge blast. The blowout led to an uncontrolled release of crude oil and natural gas as the well’s pressure control systems failed. Immediately, more than 600 families (mostly from the indigenous Assamese and tea tribe communities) of two villages–Baghjan and Dighaltarang were evacuated to the nearby Baghjan Government ME school premises.

“There had been a loud hissing sound and soon news spread that a pipe blasted and we have to leave home that moment,” Renu Moran (name changed) recounted the incident on May 27.

“I had just finished cooking, but had to leave everything behind—our belongings, livestock and all essentials because many of us experienced breathing difficulties,” continued the middle-aged woman with a choking voice “even the fodder for our livestock has been covered with oil.” People ran helter-skelter when they saw a cloud of gas and a rain of oil.

Some 12 shelters had been set up till now and thousands of people have shared space in the constricted facilities without caring for the essential social distancing norms amid the ongoing nationwide lockdown due to the Covid-19 pandemic.

Recurring tremors in the area frighten the panic-stricken people all the more. Cracks appeared in the walls of many houses.

A day later two other people Prabin Dutta (55) and Axom Gohain had died. The report further stated that the local people have leveled serious allegations that these deaths were due to the poisonous effect of the toxic crude.

“People complained of severe headache, nausea. Everything smelled of kerosene,” said an elderly woman taking shelter in the make-shift camp.

“Nobody ever imagined such a catastrophe would hit our Baghjan area. I had to leave everything–my poultry and five pigs. I saw one of the pigs dying as I left,” cried another woman in front of reporters.

Burnt carcasses of livestock lie here and there in the deserted villages. “The fire gutted everything. From as high as the betel nut trees to small tea plantations-everything burnt down,” said Jagat Lagasu, who lives near the Brahmaputra on the edge of the Dibru-Saikhowa National Park. “The continuous roaring noise from the blowout has become an irritant, taking toll on the health of people,” he added.

Air, water and soil have become equally polluted with the spilled over oil forming a thick toxic layer over croplands, fisheries, tea plantations and forests. Although oil leakage in the area is not a new problem but this is for the first time such a massive disaster has hit affecting lives and livelihood and devastating he fragile ecosystems.

The International Indigenous Peoples Movement for Self-Determination and Liberation (IPMSDL) calls for accountability and justice for the oil well catastrophe to indigenous Assam communities and to the environment of Northeast India.

“Just days after the commemoration of World Environment Day, reality confronts us on how State actions and big corporations continue to worsen Indigenous Peoples (IP) vulnerabilities and fail in protecting endangered ecosystems,” stated an IPMSDL report.

The accident site was within the eco sensitive zones of two richest bio-diverse areas in northeastern India– the Dibru-Saikhowa National Park also a biosphere reserve and the Maguri-Motapung Beel—one of the most important wetlands in the region.

In 2013, the sighting of a Baikal bush warbler in the Maguri beel increased the number of avian species seen in India to 1,225.  Reckoned as a rich wildlife habitat and a haven of rare avian population– both endemic and migratory–Dibru Saikhowa is one of the last refuges of the endangered White-winged Wood Duck.

The area is also known for its rich herpetofauna. The rescue of a black soft-shell turtle (nilssonia nigricans) thought to have been extinct in the wild in the Baghjan Tea Estate  near the Maguri beel a few years back rejuvenated herpetofauna conservation efforts in the state. Those efforts have now been severely jeopardized by the spill of crude followed by the inferno that brought doom to the different ecosystems–river, wetland and grasslands.

The oil spill reached these two hotspots and three rivers connected with the Brahmaputra within no time. Two days after the incident the carcass of an endangered Gangetic dolphin was recovered from one of the river channels.

“With the approach of the evening you would hear the uninterrupted cacophony of insects in the Maguri beel. That has now fallen silent,” said Jainal Abedin who runs an eco tourism business in the area. “I can’t hear the croaks of the frogs as well,” he said.

“With many of the insect and amphibian species on the decline from the crude spill, wonder how the next season of migratory birds would be? No doubt OIL would compensate for lives and property. But what would be the compensation for the ecological disaster? How would OIL compensate for the damage that has become irreversible,” asked Chandan Kumar Duarah, a science and environment reporter.

“The indigenous communities engaged in agriculture and fishing would otherwise have been busy in their paddy fields at this time of the year. They would definitely return to their homes from these make-shift camps but most of them would lose their livelihood as their land become unproductive, water sources poisoned. This is one perfect example of the continuing plunder of indigenous territories for corporate take-over and profit,” he added.

Although, India’s minister for petroleum and natural gas Dharmendra Pradhan discussed the situation with the heads of OIL as well as of the Oil and Natural Gas Commission (ONGC) and directed to take all necessary steps to ensure safety and all possible support to the local population, the situation could not be brought under control. A Singapore-based disaster control team that arrived at the site the day the fire broke out said that it might take weeks to stop the fire and oil leaks.

The lack of preparedness on part of the operating agencies has led to widespread condemnation while protests against drilling permission in this eco-sensitive area have grown louder. There have been increasing concerns by environmentalists over this issue and they have now been joined by local students unions.

Meanwhile, an FIR has been registered against Oil India Limited (OIL) and its outsourced well operator John Energy for the Baghjan blowout under the Indian Penal Code and the Disaster Management Act. Two officials responsible for the blowout well, have been placed under suspension, said OIL chairman and MD Sushil Chandra Mishra. The Company formed a five-member inquiry committee to look into any prima facie evidence of human error.

The disaster struck in the midst of a raging controversy following environmental clearance to Oil India Limited by the Union Ministry of Environment, Forest and Climate Change for drilling and hydrocarbon testing at seven locations inside Dibru-Saikhowa National Park surrounded by six rivers–Lohit, Dibang and Disang on the north and Anantanala, Dangori and Dibru on the south.

‘There has been a trend to grant clearances to projects that destroy sensitive wildlife habitats, based on poor assessments. The main problem in environment protection is the current environmental decision-making process. We don’t believe in expert committees and the regulatory authorities concerned as they seem to be hand-in-gloves with the operating industries,” said environmentalist Jayanta Kumar Das.

“India is a signatory to the Convention on Biological Diversity and the draft agreement, published in January and likely to be adopted in October, calls for protection of at least 30% of land and sea areas to stop catastrophic loss of biodiversity by 2030.

As the Union Government turned to the Northeast–the most resource-rich landscape but largely untapped region in the country– communities now find themselves in a quandary. Indigenous communities want recognition of their ownership over natural resources.

Tribal communities in Nagaland and Meghalaya are approaching courts to protect their rights over oil and coal and those in Mizoram, Manipur and Arunachal Pradesh are struggling to retain control over their forests. In Assam, protests have continued against big dams and river interlinking. The recent times have been witness to the growing concerns against coal mining and oil exploration.