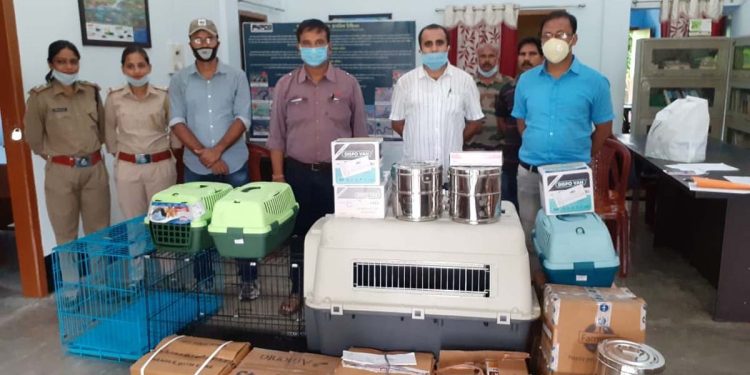 The items handed over to the Biswanath Wildlife Division of Kaziranga National Park by WWF-India. Image credit - Northeast now

Keeping in view of the current flood scenario, conservation NGO, WWF-India has extended veterinary support towards the Biswanath Wildlife Division of the Kaziranga National Park.

Every year, due to the annual flood on the north bank of river Brahmaputra – the 6th addition of the Kaziranga National Park, Biswanath Wildlife Division – numerous wildlife species are affected due to the rising water level inside the park.

The rising water forces the wildlife species like barking deer, hog deer, swamp deer, hog badgers, porcupines, different species of reptiles, civets and birds to move outside and they come into conflicts with human habitation and vehicles on the road.

WWF-India handed over the items to Mukut Chandra Das, the divisional forest officer of the Biswanath Wildlife Division of Kaziranga National Park on Sunday at the DFO office in Biswanath Chariali.

Conservation NGOs like WWF-India, WTI, Aaranyak, TSA, AWRRO, local volunteers and the veterinarians from the state animal husbandry department work tirelessly round the clock not only for the rescue and treatment of wildlife in distress but also for the local community and domestic livestock at the same time.

“WWF-India has been working with the local communities for creating awareness during the flood season, organizing interactive workshops for veterinarians working in and around Kaziranga National Park in collaboration with other NGOs,” the DFO, Biswanath Wildlife Division, KNP stated.

The DFO also said the NGO has been providing support for the fringe area vaccination of domestic livestock, screening of wildlife diseases in collaboration with the College of Veterinary Science, AAU at Khanapara and also providing support to the forest department during flood.

The NGO hoped the veterinary support will assist the veterinarians and forest department during rescue operations.

It also appealed to the local communities to cooperate and support the forest staff and veterinarians during the rescue operations for the welfare of the displaced animals.