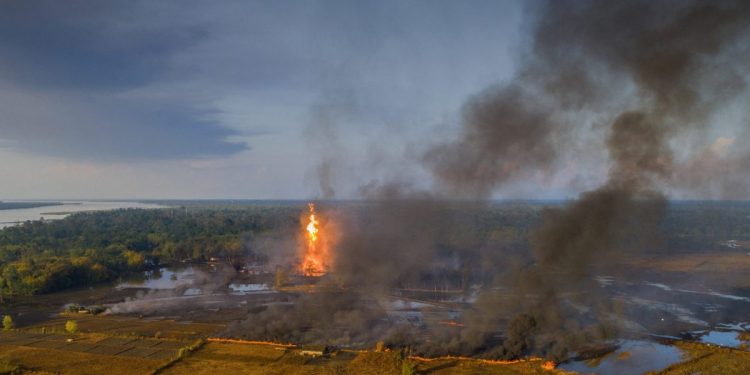 Oil India Ltd (OIL) cannot disown its responsibility for the fire incident in Assam’s Baghjan oil well by shifting the blame on the contractor, the National Green Tribunal has said.

While hearing a plea filed by activist Bonani Kakkar and others alleging the failure of the authorities in preventing the blowout of the Baghjan oil well, the environmental watchdog constituted a fresh six-member committee to fix responsibility for the failures of the concerned individuals in the incident.

Well number 5 at Baghjan in Tinsukia district, had been spewing gas uncontrollably and it caught fire on June 9 last year, killing two of OIL”s firefighters at the site.

A bench headed by NGT Chairperson Justice A K Goel said it “prima facie” agrees that there was failure of the OIL in taking safety precautions and there is need for ensuring that such incidents do not recur.

“We direct this aspect to be gone into by a six-member committee headed by the Secretary, Ministry of Petroleum and Natural Gas in consultation with the DG Hydrocarbon and DG Mines Safety, DG Oil Industry Safety and PESO (Petroleum and Explosives Safety Organization), Chief Controller of Explosives, New Delhi within three months,” the bench said.

The panel may review the situation and take appropriate remedial measures, including fixing responsibility for the failures of the concerned individuals in incident, the tribunal said.

“It may also lay down the road map for ensuring compliance of safety protocols by all similar installations. Effective execution of such road map may be ensured by the Secretary, Ministry of Petroleum and Natural Gas. The Committee may also suitably take into consideration the observations in the reports of the Committee earlier appointed,” the bench said.

“Last aspect is assessing the damage to the environment and remedial restoration plan, including Dibru-Saikhowa National Park, the Maguri-Motapung Wetland.

“We direct this aspect to be looked into and remedial measures planned by the ten-member Committee headed by the Chief Secretary, Assam, nominees of MoEF&CC and CPCB, Assam Wetland Authority, State Biodiversity Board of Assam, SEIAA  Assam, State PCB, Chief Wildlife Warden Assam, District Magistrate, Tinsukia, and Managing Director, OIL,” the bench said.

The tribunal said that while floor level compensation can be directed to be paid even on some guesswork, higher compensation claims require adjudication, based on evidence of loss.

“As already observed, in absence of relevant data, we are unable to determine the claims for higher compensation, beyond the amounts already paid or conceded by the OIL.

“It is made clear that this order will not debar any victim of the occurrence who is aggrieved by the denial of compensation or inadequacy of compensation to take remedies for such claim before any appropriate forum in accordance with the law,” the NGT said.

The NGT on June 24, 2020, had formed a committee headed by former high court judge BP Katakey to look into the matter and submit a report.