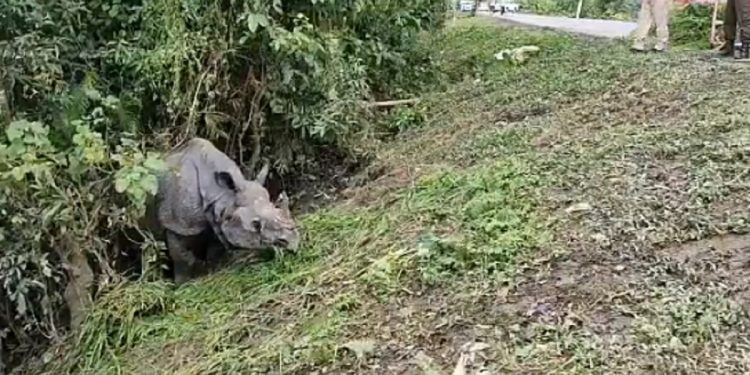 A rhino that has strayed out of the Kaziranga National Park has finally returned to its natural habitat.

The rhino has made the National Highway 37 its home for the last 72 hours.

It was giving a harrowing time to the commuters as well as the Forest department officials.

The rhino went back to the national park on Monday night after flood waters receded.

Notably, the Kaziranga National Park is ravaged by flood every year during this part of the year.

Rhinos along with other animals of the park die annually due to the flood.

Several animals also lose their lives when hit by speeding vehicles along the highway.

The Forest officials have been attending to the rhino extending all possible hospitality to the 35-year-old rhino for more than 72 hours.

This 35-year-old rhino made the National Highway it’s home for the last 72 hours.

The rhino is partially blind, and was mentally not prepared to return to KazirangaNational Park because of high flood.

Notably, despite the high flood, the rhino did not stray out of Kaziranga National Park.

Technically, the rhino was still within area of the wild habitat.

National Highway 37 is the southern border.

According to Forest Department and ASDMA officials, around 100 animals were killed, and more than 130 animals rescued even as 95 per cent of the world-famous Kaziranga National Park remained inundated.

Besides Kaziranga National Park, the Manas and Orang national parks, the Pabitora wildlife and the Tinsukia wildlife sanctuaries were also affected.