Though doyens like Jyoti Prasad Agarwala did their mite for the Assamese film industry, yet, Assamese films released in theatres still do not manage to pull in a humongous crowd 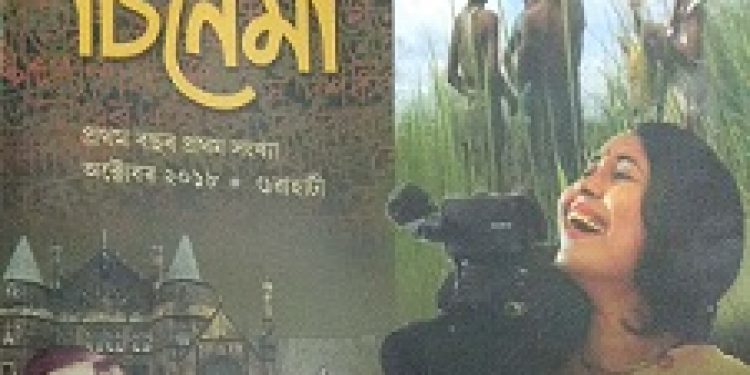 The cover page of the magazine.

A new quarterly Assamese magazine Bixoy Cinema hit the stands this October. As the name suggests, the subject-matter of the magazine is solely cinema. The first issue seems promising. The cover page has been designed by renowned artist Kiran Sankar featuring Rima Das and a scene from her film Village Rockstars. It also features a photograph of the pioneer of Assamese cinema Jyoti Prasad Agarwala.

Film connoisseurs, artists and also the common people wrote for the first issue on various topics. An interesting topic was – Jyoti Prasad Agarwala’s academic pursuit at the University of Edinburgh, UK – a fact which very few people know about. The first issue also carried the interview of Rima Das and several other interesting write-ups. The paper quality of the magazine is pretty good.

Though doyens like Jyoti Prasad Agarwala did their mite for the Assamese film industry, yet, Assamese films released in theatres still do not manage to pull in a humongous crowd. A lot of critics have written in the first issue as to why most Assamese films do not fare well at the box office. But, the critics have missed out on one thing – lack of film literacy and interest among the masses.

It is very important to bridge the gap between the audience and the cinema. Of late, Assam has been witnessing a series of good films by young directors and powerhouse performances by artistes. So, as far as the quality of work is concerned, the less said the better.  The filmmakers will have to make movies as per the taste of the audience. Good response to a film will encourage directors to make more good films in a consistent manner.

Assam still lacks a proper platform for discussing subjects like cinema. Nobody writes about cinema as a topic per se. They write either to promote the movie or a routine critical review of a movie. Though few good film critics are there in Assam and few of them have compiled their thoughts in the form of books, but their reach is very limited.

Taking the above factors into consideration, the magazine Bixoy Cinema can play a key role in promoting Assamese films and being the medium between critics and readers. Cinema is a collaborative art form and purpose of cinema cannot be limited to entertainment only. It has been a medium of experimentation of academic discourses, popular psyche, and can be discussed from different perspectives by different people of different backgrounds.

The Editor of the magazine, Manoj Borpujari, has hinted in his editorial that the write-ups shall neither be completely based on technicalities of cinema nor only on the subject-matters. It will be open for both. It is hoped that this magazine will be able to carve a niche on the subject of critical review of Assamese films and thus attract more and more readers across all sections of the society.