‘Suspended Inspector Boro’: Martial Art with a Cause 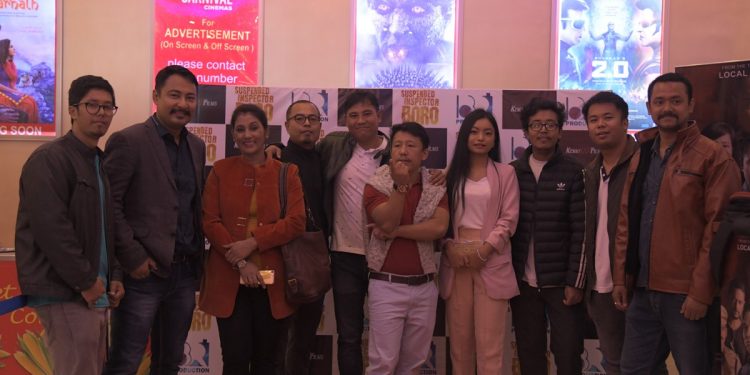 Gathering at the premiere of Assamese film 'Suspended Inspector Boro' at Carnival Cinemas in Guwahati, on December 6, 2018.

The team of Local Kung Fu has come out with their third movie Suspended Inspector Boro — a full-packed action thriller.  Local Kung Fu (2013), which was India’s first kung-fu movie, and its sequel made in 2017, have already set martial art as a genre in cinema in India from a regional setup.

Suspended Inspector Boro is about an honest yet suspended cop who lives with a spirit of uncompromising nature. With a serious story of human trafficking and jam-packed action the movie is attracting all to the theatres. The movie revolves around Inspector Gagandeep Boro and a girl named Sabrina from a small and remote village of Tangla sub-division of Udalguri district. She goes to Guwahati with a person who promised her a good placement and lands up in a brothel run by a corrupt but powerful police officer Jwala.

When Sabrina goes missing from her ‘hostel’, her sister back home contacts SP Sanyukta and asks for her help. SP Sanyukta unofficially assigns Inspector Boro for the mission of tracing Sabrina and what follows are some unpredictable twists and turns leading to her rescue. Written and directed by Kenny Basumatary Suspended Inspector Boro proves to be a commercial blockbuster.

Kenny, who in Local Kung Fu discussed many social evils through comedy and this time also he does it very tactfully. The movie plot also deals with women empowerment, moral policing and the menace of plastic. Though the Northeast has been a follower of Bruce Lee with his haircut since the ’70s it never got represented in our cinema. But Kenny and his team became the trendsetter of introducing martial art to the core of the screenplay.

Suspended Inspector Boro effectively discusses the plight of human trafficking in the Northeast through camera. It exposes the nexus between the traffickers with the corrupt official machinery. Here everyone acts convincingly their roles in the movie. Utkal Hajowary as Inspector Gagandeep Boro appears quite composed in his character heralding an image of a possible action series hero. Kenny as a bad cop Jwala also attracts attention while Ponam Gurung as Sabrina appears promising. Ipshita also plays her role well as a journalist.

Though the movie and its treatment of the subject is quite new to Assamese cinema, a soft flavour of Netflix’s Sacred Games is visible in some scenes. The dialogues of Suspended Inspector Boro, as the subject actually demanded, appear less provocative to recharge the audience and the censor board. The soundtrack also arouses our senses with a rap on pollution used as a metaphor. However, the most remarkable part of the movie is the actions without the use of special effects. The intensity of the fighting scenes is commendable.

A hero-centric movie, Suspended Inspector Boro, is the continuation of some brilliant Assamese commercial cinema made in the last three years — Kotha-Nadi, Maj Rati Keteki, Duronir Nirola Ponja and Three Smoking Barrels. For the coming productions in Assam Kenny and his team can offer a lot.

(Farhana Ahmed is ‘Northeast Now’ Correspondent in North Lakhimpur. She can be reached at:[email protected])