A short film directed by Sikkim filmmaker Angel Tshering Lhamu, titled, ‘Kitabein – the books’ is creating waves in Youtube since it was released a week ago.

The script for the six minute 18 second short film has also been written by Angel and is trending with accolades from online viewers. 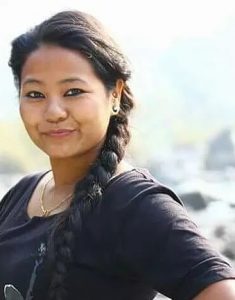 A post graduate in Nepali language from Sikkim Government College, Tadong in Sikkim, Angel has a flair for writing from a very young age and had already written a series of poems.

Angel then moved to Mumbai where she took up a diploma in filmmaking from Art of Cinema Institute in the year 2015-16.

She has also worked as an assistant director in many music videos and short films since then.

Kitabein is her directorial debut of she also wrote the screenplay.

The background score for the short film is scored by her singer husband Raaz Chettri.