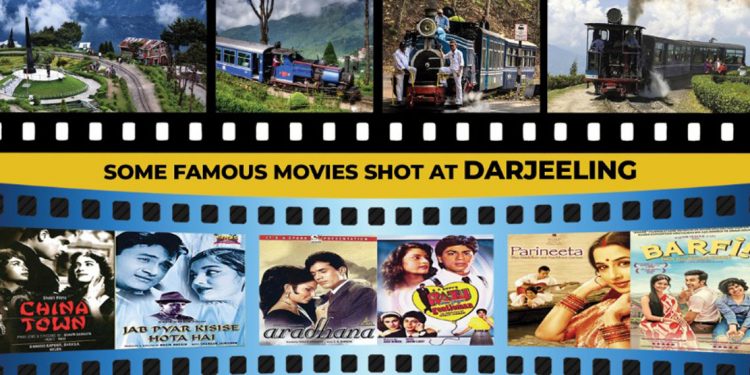 Some of the films shot in Darjeeling.

If anyone wants to shoot film using the world-famous Toy train of the Darjeeling Himalayan Railway, a UNESCO World Heritage site, the Railway authority has made the permission process easier.

Now producers of a film can apply online seeking permission for shooting a film using a toy train or in the premises of the Darjeeling Himalayan Railway.

Darjeeling Himalayan Railway, a UNESCO World Heritage site, is known all over the world for its fascinating journey through the hills of Himalayas in narrow gauge Toy train.

This place has been attracting tourists from all over the world, who never wishes to miss the mesmerising romance of the Toy train ride through the hills criss-crossing the Hill Cart road.

Apart from tourists, film enthusiasts also throng in this area for film shooting related works.
More than 25 Bollywood films were shot in the Darjeeling areas.

The picturesque and iconic locations always attract filmmakers for shooting of their films.

“For almost seven decades, filmmakers from Bollywood, Tollywood (Kolkata-based Bengali film industry) and other regional cinema hubs used to come all the way to Guwahati or send their representatives for elaborate formalities. They can now do it with the click of a button on the new DHR booking site,” said a report quoting an NFR spokesperson.

Now plan and fix your shooting program at the Darjeeling Himalayan Railway, a UNESCO World Heritage Site with just clicks of the mouse @RailMinIndia pic.twitter.com/OaCqbDIrcA

DHR expanded to Darjeeling Himalayan Railway, a UNESCO World Heritage Site and it was completed between 1879 and 1881.

The narrow gauge DHR covers 88 km from New Jalpaiguri in West Bengal at about 100 metres above sea level to Darjeeling at about 2,200 metres.

NFR said any film producer or enthusiasts willing to undertake film shooting either using the Toy train or railway premises along DHR can go to https://nfrdhrbooking.com and apply online without physically coming to the offices concerned or the shooting site.